Yes, after months of hard work by team Codesion, we’ve finally launched our Git hosting service (in beta)! The rise of distributed source control management systems in recent years has led to a number of interesting, open source options for developers. We are now ready to bring the “best of breed” Git service to the Codesion enterprise security platform.

Adoption of Git and Distributed SCM

According to a comprehensive 2010 Forrester SCM tools survey, open source Source Code Management (SCM) tools now account for nearly 50% of market share. Centralized systems (SVN/CVS) account for 45% of usage, while distributed systems like Git and Mercurial are at 3.4%. 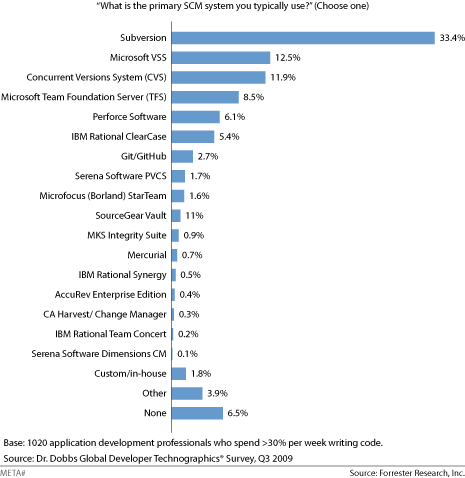 These figures mirror our own observations that while most of our customers seek secure, reliable centralized systems like SVN, an increasing number of also have portions of their code under Git. Our objective is to provide you with both options under one, consistently managed roof. Similarly, we released Subversion in 2005, a year after its official release, replacing CVS. Interestingly, 7% of our customers still use CVS today (the rest use SVN), reflecting the long periods required for companies to switch their SCM systems – a “seven to ten year decision” according to Forrester.

Given the design of our private cloud hosting platform, it is relatively easy for us to plug in new ALM software. What takes longer is thoroughly QA’ing and bug-testing prior to release, such that our tens of thousands of users aren’t impacted. But now we see Subversion and Git happily co-existing beside each other. Subversion is enterprise ready, with centralized control, backup and security, while Git is lightweight, fast and distributed- well suited for open software development where there is less focus on security and centralized control. A couple of core differences:

With Codesion, you can choose one or the other (or both if you have multiple projects). The good thing is that Git and SVN play nicely together, with Git having a native interface into Subversion.

Codesion Git hosting users will benefit from the same Enterprise-grade, PCI compliant level of service you get with our Subversion, CVS, WebDAV (Network drive), Trac and Bugzilla services. Codesion’s unified roles and security schema provides one single interface to configure permissions and access across all our hosted apps. All hosted repositories are backed up to the latest 10 minutes in multiple SAS-70 compliant datacenters by our advanced backups system. Daily downloadable snapshots extend back 30 days, and can be scheduled to push to your own datacenter or managed cloud (i.e. Amazon – AWS).

Please note that our Git service is currently in Beta, so we will be gradually adding in support for each of these of the coming weeks. But as of now, you can log in and start coding away with Git! Give it a try, login, click the projects tab, select your project (or create a new one), and add the Git service under the Services section. 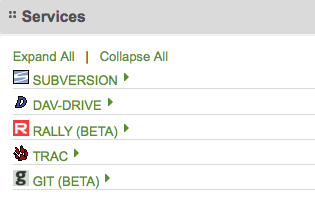