XL Deploy has proven to be a great deployment tool for applications built on any kind of platform including JBoss, WebSphere, IIS, EC2, etc. We like to think we're forward looking when it comes to the tools we need to support in the future to be able to deploy the next generation of applications.

We've been following the recent development around Docker closely, and we can very much imagine that future applications will be built on top of a Docker container. So in one of our recent Tech Rallies, we took some R&D time to experiment with building a Docker plugin for XL Deploy.

We wanted to support the following use cases:

Supporting just these use cases is a good starting point for an XL Deploy-Docker integration. This will allow you to take your Docker application from test to production, let XL Deploy do all the work, and manage the lifecycle of your application.

How we set it up:

This Dockerfile defines a container running a Nginx server that serves a static html file. In our deployment package for XL Deploy we placed both the Dockerfile, and the index.html file the application depends on. How did we create a deployment package for XL Deploy? First, we defined two new types:Next, we answered a different question: "What kind of infrastructure do we need to run our application?" Since Docker only runs on Linux, we used a Vagrant setup running CoreOS. CoreOS is an interesting project that brings you a minimal Linux distribution that provides just enough to run Docker containers. In order to model this in XL Deploy, we defined a docker.Registry type that extends generic.Container so it can be created on an overthere.SshHost.  We also then created deployeds for our docker.Build and docker.Run deployables that map to our docker.Registry. By doing this, we could now create a deployment package "DockerApp" containing our files, and an Environment "CoreOs" that has an overthere.SshHost to connect to our remote CoreOS instance with a docker.Registry. Now, if we map the DockerApp to the CoreOS environment, XL Deploy creates the following mappings: 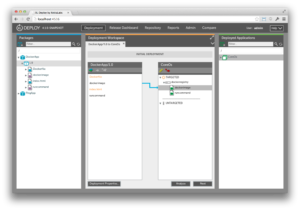 Since we have not defined any behaviour for our types yet, performing the deployment now would not create any steps in the deployment plan. In order to define the behaviour we need for our deployment, we will use a new way that we have been developing called "deployment rules".

Deployment rules for our plugin:

Rules are a declarative way of defining behaviour that makes defining actions much easier. The new XL Deploy rule system is still under development, so consider this a sneak preview!  It will be released in one of our upcoming releases. In this case, we define three rules. All rules will contribute a step that executes a command on a remote host. We use the "run-command" step to do this. To get an impression of the rules we created look at next screenshot: 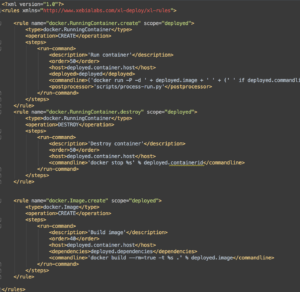 How we ran a deploy: 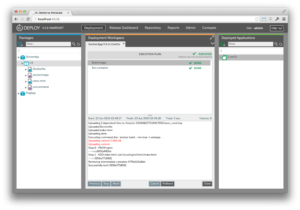 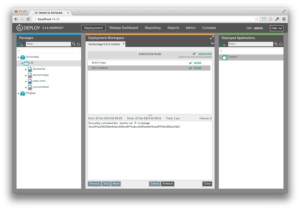 Looks good! our application has been successfully deployed.

How we undeployed our application: 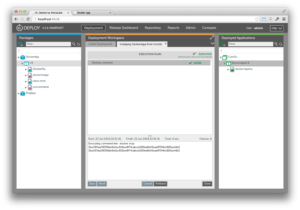 In the step log we can see that the container has been stopped. This concludes the deployment and undeployment of the application. 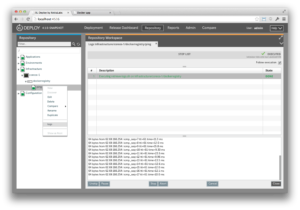 The small Docker plugin we built in a couple of hours proves that it is easy to manage simple Docker-based deployments from XL Deploy. The experiment highlighted the following benefits of deploying Docker applications with XL Deploy:
We can also think of the following improvements:
These are all features that could be part of a more fully-featured Docker plugin for XL Deploy in future. Watch this space!