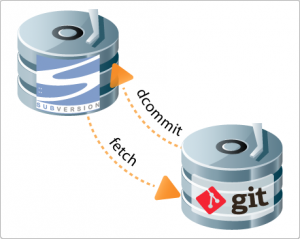 Apache Subversion® since its inception in 1999 continues to be the most widely adopted version control software in the majority of open source development projects and a large number of corporate projects. However in the recent years DVCS has started becoming popular and usually have the following properties in common:

Since 2005 Git has evolved as a world’s leading DVCS (distributed version control system). What makes Git distinct from nearly every other SCM out there is its branching model. Git makes merging simple and also you will have “local” benefits (stash, index and speed). Git SVN-Bridge is a bi-directional utility that is bundled with canonical Git written in C and Perl that allows you to have the repository in Subversion and use Git as an SVN client. This let users have access to a local Git repository and use a bunch of Git features like local branching and merging, use the staging area, rebasing while having the repository hosted in Subversion.

Clone the SVN repository as follows

Work on your newly created branch in the local repository as usual. Once complete, you can switch to the master branch and merge your changes to master.

When complete, don’t forget to update your SVN repository, by rebasing

Now you can commit back to the SVN repository,

Using Git-SVN Bridge as an SVN client gives the developer a freedom to use some of the features offered by Git.

For more information on Git and Subversion visit the following link: http://www.collab.net/products/teamforge/git-for-the-enterprise