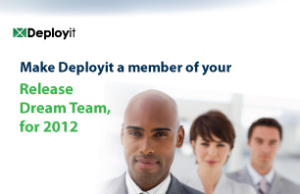 XL Deploy is the choice solution for Enterprises with growing release teams. The product is rich in features that enable Enterprise Release Teams to drive applications out quickly and efficiently. XL Deploy is the perfect compliment to your hand selected application release team, for 2012. With online business becoming increasingly critical, your application release team are assuming increased relevance. Enable them with the best tooling. Powered by XL Deploy, your Release team can automatically deploy applications across one comprehensive deployment platform. The team can stay aligned with the lifecycle of each release with access to robust release reporting that reports across all major middleware and cloud environments. The team can enjoy critical release lifecycle transparency with slick role-based user access to the platform. All XL Deploy features are built on a robust deployment engine that automatically calculates deployment steps, increasing speed and efficiency and the platform boasts a user-friendly UI.   An excellent team, backed by a cutting edge release automation tool can guarantee that you release applications on time, every time for 2012. Highlighted Feature: Release Authorization Among the most influential features in XL Deploy’s newest release is the Release Authorization feature. It is now possible to declare conditions that must be met before a deployment package is deployed to a particular environment. This adds another element of control for the XL Deploy user and ensures accurate and auditable activity at every stage of the deployment cycle.