People Are Humans Too!

Huh? What kind of title is that? Good question I wanted to take some time to remind those at the top that they aren’t standing on the people on the bottom, they are held up by the people on the bottom! Time-after-time when working with teams I constantly hear that they want to be “all in,” but those above them make it hard to keep the faith that Agile will take off.  When trying to make the transition, it is very difficult to rebuild that bridge to be a two-way versus a one-way bridge to development.

Those in management need to start rebuilding their mindset to help build the bridge.  Since American football season is upon us I thought it might be a good time to use my analogy I use with teams quite often.  The management team I always refer to as the quarterback, and the teams as the offensive line.  The offensive line usually doesn’t make the paper, they don’t usually earn as much as the quarterback but without them the quarterback wouldn’t be successful.  So we have to ask the question then “why are they there?”  Those at the team level exist because they have a desire to be there.  I used to thank my teams on a regular basis for choosing to be there.  You didn’t form a team of ignorant people; they are valuable and could work elsewhere.  They are not there for the glory it is the passion for what they do that keeps them in the game.   Let’s jump to the quarterback for a moment; quarterbacks are usually also the captains, it is not because they can throw the ball well.  They are the captains because they have great leadership skills and the team trusts them in where they are headed with the ball and what they need to do to succeed. The teams trust that the features or value requested are what it is going to take to succeed from those above. 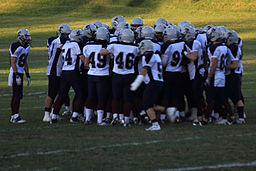 Building trust requires communication and small successes. Individuals and interactions over processes and tools…sound familiar? Management folks need to have an open mind and start to communicate with the team.  Remember that without them you’d never score!  Huddle up and let the team know that they are going to win and what the next play is to get closer to the goal line.  Oddly enough some football teams keep their plays on index cards…sound familiar? Go Colts!