Have you heard these statements lately?

“Our retrospectives have dried up.”
“Why are we doing this? We never do anything about it.”
“Uh, I don’t know – there’s nothing that we need to change.”

Well, this is not uncommon for agile development teams to reach the point where their retrospectives become ineffective or the team members stop seeing value in the meeting. In fact, this occurs with both newly formed teams that just haven’t grasped “Inspect and Adapt”, and mature agile development teams that have lost sight of the need for continuous improvement. There are multiple reasons why retrospectives may be going south, but there are three biggies that stand out in the crowd:

So now you are saying, “This is exactly what’s wrong with our retrospectives, but what should we do about it?” Well, here are a couple great ideas that work: 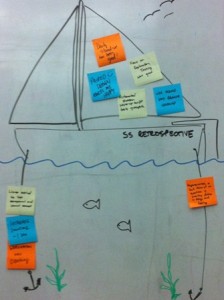 There is a great game called Speedboat from The Innovation Games Company. The original goal of Speedboat is to frame up a constructive manner by which customers can provide product feedback without spiraling into a complaint session. The great thing is that this game can be used by teams for performing retrospectives. This game has been transformed and adapted to Sailboat (first saw this posted here). Here’s how it works:

The 4L’s is a retrospective technique put forth by Mary Gorman and Ellen Gottesdiener. Teams like this format in that it’s quick and forces all parties in the room to interact. The 4L’s are: Liked, Learned, Lacked, and Longed For. As you can see, the 4L’s give people a simple area to focus their thoughts that can easily be translated into issues and or stories for the backlog. Here’s how it works (taken straight from Mary’s and Ellen’s Blog):

Both the Sailboat game and the 4L’s encourage full team participation, they are fast and focused, and they can be fun. No matter which technique you use for your retrospective, always remember a few key rules:

Please share your ideas and thoughts, retrospectives can and should be fun — and they are immensely valuable.

If you are totally new to the whole concept of retrospectives or you really just think it is about getting a refresher, check out the Retrospectives section of the VersionOne Agile Checklist.