SAFe and Other Frameworks for Scaling Agile: A Case Study

The following is a guest post from Brad Swanson, VP and Sr. Agile Coach at agile42

Scaling agile is one of today’s top challenges for many. I hear it from our customers all of the time. When agile and non-agile worlds collide within an organization, time to market and software quality often suffer. There are a number of fans in favor of the Scaled Agile Framework® (SAFe™) as the solution. I want to point out that while SAFe is highly effective for some organizations, it may not be the solution that’s best for you — OR you may be going about it the wrong way.

We recently worked with a leading cable TV company that faced long and challenging development cycles with software quality problems. Guided by a small team of coaches*, they successfully implemented the Scrum framework with SAFe to scale up to 150 people delivering their set-top box/DVR software and server-side systems to support the DVRs. The following challenges drove the need for change:

Agile methods and SAFe reduced time-to-market for major releases from 12+ to only 4 months, the shortest practical timeframe, given the cost of deploying firmware to over 11 million DVRs nationwide. Releases changed to fixed-date; scope was managed and prioritized to ensure that all business capabilities were delivered on time, even though some low-priority features (‘bells and whistles’) were cut to meet the delivery date. Quality improved significantly as a result of earlier and more frequent integration testing, which is fundamental to the agile approach. SAFe was tailored to the organization’s unique needs after piloting elements of it on a smaller scale.

Here’s what we learned:

At the portfolio level, Lean-Agile principles are applied to balance workload with delivery capacity and optimize value delivered, while aligning architectural efforts. At the Program level, product features are integrated and tested often by a System team. At the team level, multiple agile teams build and test small features within a single business domain or system component, and deliver running, tested features (user stories) on a set cadence (usually every 2 weeks) to the System team. SAFe prescribes fixed released dates with variable scope using the release train metaphor; if a feature misses the train (the date), it has to wait for the next release train.

Other frameworks for scaling agile methods are also useful in many contexts, including Disciplined Agile Development, Large Scale Scrum from Larman/Vodde, and Scrum of Scrums.

At agile42, we recommend an incremental and empirical approach to introducing agile practices at scale, rather than prescribing one particular framework to implement. Scaling lean-agile practices is a complex problem and every organization’s context is unique. Long-term success is more likely with an empirical and evolutionary approach, as described in agile42’s Enterprise Transition Framework™.

In the cable TV case study, agile practices were first piloted by 2 teams. We tried many of the SAFe practices throught the pilot efforts and used the lessons learned to guide the expansion of agile and SAFe.

Where the full SAFe framework was excessive

A different agile42 client, a financial institution, issued a corporate mandate to implement SAFe. In this case, teams did their best to implement all of SAFe in a “big-bang” rollout. It became clear after a few releases (4 months) that significant portions of SAFe were unnecessary, and even counter-productive in their context. Their 5 teams were each working on mostly independent applications, and there was no need for the overhead and coordination of a Program-level agile release train so they abandoned it, allowing teams to operate more independently. An evolutionary approach could have helped this organization learn what parts of SAFe were applicable in their context, in a less disruptive manner.

In our case study, the cable TV company changed their release cycles as shown in Figure 1.

Figure 1 – Product development cycle before and after

The agile development cycle uses the release train concept from SAFe. Releases have a fixed date, and scope is selected — and adjusted if necessary — in order to meet the deadline. If a feature misses the train, it has to wait for the next train. By aggressively prioritizing scope throughout development, and frequently integrating and testing, this model ensures that a viable product with the most important features will be ready on the planned date.

The R&D organization started with a list of over 150 requests for features (projects) from the business. Senior leadership formed a Product Council consisting of 10 Product Owners (product managers), each of whom was aligned with a particular business area, plus R&D Directors. The Product Owners each made a ‘sales pitch’ for the highest value projects/features in their own domain, and the Product Council stack-ranked all the requests that might fit into a 4-month development cycle based on ballpark estimates. Ranking was accomplished by first scoring each request on a number of criteria: importance to business stakeholders, alignment with strategic initiatives, and cost of delay (urgency). This objective scoring cut the number of ‘contenders’ down to a more manageable number, from which point the Council members used a multi-voting technique to arrive at a final ranking.

See Figure 2 below for a description of team structure before and after. Before agile was introduced, most of the people worked in large teams organized around technology components: the DVR (client) component and several back-end server components. Most of the business features however, required both client and server.  As a result, there was no clear ownership of the end-to-end business value. In the agile model, most of the people were organized into smaller feature teams (purple in Figure 2 below), each one owning features across client and server for one area of the business. One component team on the server side remained focused on building a major new architectural service. To maintain design integrity across feature teams, virtual platform teams coordinated designs across all the feature teams, as shown by the dotted line boxes  in Figure 2.

At first, the management team thought it wouldn’t be possible to form small cross-functional feature teams because each one would require too many people across too many specialties. So they put the names of every person on a separate card and began moving them around, trying to form feature teams of 10 people maximum. The managers were surprised to find that could form feature teams with only few gaps in skill sets and a handful of specialists (such as DBAs) who would need to serve multiple agile teams. Some organizations have accomplished the same structure through self-organization: allowing all the team members to collectively choose teams, rather than having a few managers do it. This organization wasn’t quite ready to embrace that idea.

Figure 2: Team structure before and after

Figure 3 below gives an overview of the release train timeline.

Figure 3: Overview of the release trains from portfolio planning to delivery

With the portfolio priorities clear and team structure decided, each new team spent about 2 weeks doing high-level release train planning. Each release train was a 4-month period culminating in an integrated delivery from all the agile teams. Each Product Owner decomposed high-level business requests (features or projects) into smaller pieces (called stories), and prioritized the stories. The newly formed teams independently estimated the scope they could deliver in 4 months and identified dependencies on other teams.

The entire R&D organization (about 120 people) gathered in one room for the 1-day release planning event, except for one team that joined remotely by video conference. 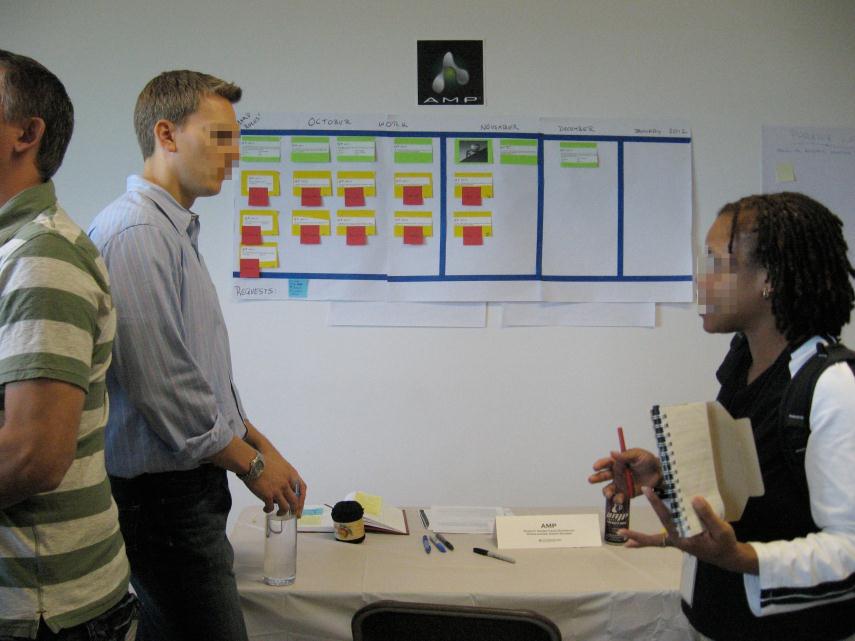 Figure 4: One team’s release plan on the wall; collaboration with other team members 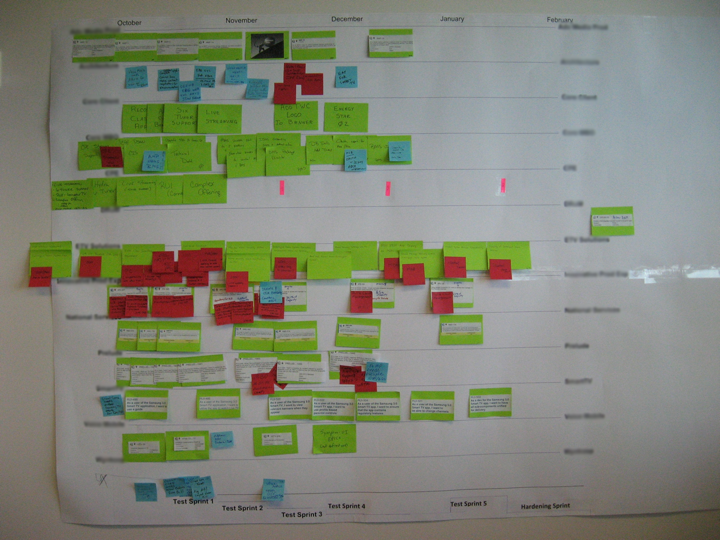 Each team worked in 2-week sprints (development iterations) throughout the 4-month release train.  The system test team integrated the work of all teams every sprint to test new features and run a regression test on the entire system. Some tests were automated but many required manual validation of video. The Product Owners from each meet met biweekly (once per sprint) to coordinate their work; additional team members participated when necessary. The final 2-week sprint was a ‘hardening sprint’ with all hands on deck to perform final regression testing.

SAFe was an appropriate model for the cable TV company because multiple teams are all building a single integrated and complex product. Prior to adopting SAFe, the organization had already piloted Scrum on 2 teams with the help of experienced coaches, and learned how to make Scrum work in their context. This evolutionary approach to adopting Agile and SAFe was a critical factor in learning how to succeed in delivering on-schedule with high quality.

*Many thanks to the team of coaches who joined me on this effort: Manny Segarra, Deanna Evans, and Ken McCorkell.