Stop Scripting Your Deployments in your CI Server

Continuous Integration tools like Jenkins and Bamboo are especially effective when building, unit testing and validating your applications. In fact, with CI tools, teams can do almost anything they want with code. But do CI tools scale?

The short answer is no. There are many steps required to deploy applications, such as removing servers from load balancers, stopping servers, updating web server content and application server binaries, running database updates, and restarting servers to name a few. Application deployment using a CI server basically means scripting out entire deployments yourself, using CI tools to move your script to a target server and running it there. In an enterprise environment, it wouldn't take long for all this scripting to turn into a convoluted mess.

So maybe you're fine with scripting. But are you ok with: 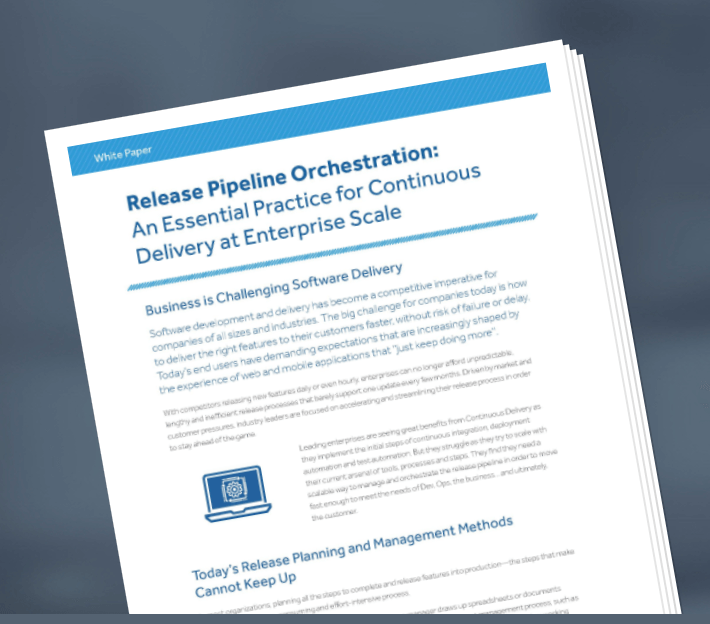 In this whitepaper, you will learn about:

CI servers typically offer a couple of choices for deployments:The latter is the more scalable of the two options, but how do you secure and configure it effectively? You don't because it's impossible. The target servers on which the deployment needs to run and the build slaves on which the job is executed depend on the “target environment” parameter. Who has permission to run the job depends on the target environment, but CI tools generally do not support security configuration of the form “this user is only allowed to run this job if the value of this parameter to the job is X, Y, or Z”. So if you want security, you're left with option 1. That's right. Building delivery pipelines using CI servers tends to mean one deployment job per application/environment combination. Changing your deployment logic, for example, to support a new target server version, suddenly means modifying tens, or even hundreds of jobs. With most CI tools, this is definitely not a quick or easy thing to do.

CI tools are proven workhorses for build, test, and validation before deploying applications to production. It's time to appreciate these pipeline standards for what they're great at while recognizing that they aren't made to automate deployment. Fortunately, IT teams all over the world are doing just that. More and more are turning to deployment automation and release orchestration software while integrating their trusted CI tools as part of an efficient, scalable and easily maintainable delivery process.   Interested in seeing what a Continuous Delivery tool looks like? Check it out, you might be surprised: XL Deploy & XL Release