Are you facing a difficult choice between version control systems? Are you having trouble sorting out the alternatives? Are you bewildered by all the opinions you find on Google? Let’s see if I can help sort this all out.

CollabNet (the original stewards of the Subversion project) provides both Subversion and Git, either through our enterprise TeamForge product or through our CloudForge Platform. We think there’s a place in the universe for each. Here’s how to find yourself in that universe. 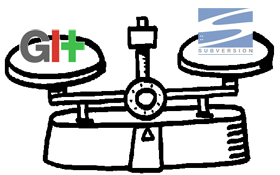 Here are some specific recommendations. If you want to stop reading at the end of this section, you should make out just fine.

What do you want from your version control system? A lot of this is the same for everyone, and both tools accomplish these tasks just fine. If all you care about is the basics, you could easily just flip a coin and get on with your work, confident that your choice would be sound. These “basics” include:

Both systems do all these things quite well. If these things are truly all you care about … flip that coin! All the discussion and decision has to do with other details, details that are always secondary to the basics, but can become crucial to particular projects or environments.

So, if you haven’t flipped that coin and gone away, let’s look at the differences.

But first, some demythologization

Here are a few things you may have heard that just aren’t true, or aren’t true any longer:

On the other hand

As you’ve surely heard, the key difference is that Subversion is “centralized,” while Git is “distributed.” You can go many other places to learn about what that means in their implementation, I don’t spend time on that here. But I will talk about why it matters to you.

Git’s distributed model means that you have full version control operations purely locally on your workstation. Of course, the changes you make locally are not visible to anyone else, until you do something else (Git’s “push” or “pull”), but you can check changes in so they’re not lost, create branches, merge among branches, back up to older versions, and browse and compare versions — all without a network. The one cost in all that is, you have to learn some additional commands (push, pull, clone) and workflows, if you ever expect anyone else to see your work. You can do everything locally that any version control system can do … and you also have extra steps required to make your work visible to others, kind of an inescapable trade-off. On balance, local versioning is a significant convenience for the developer, and a big part of the popularity of Git.

Most processes have some reason to want one copy of everything, somewhere, that’s reliably known to be “the official version.” With Subversion, that’s the central repository. With Git, that’s … some repository or other: the tool doesn’t privilege any one repository over another, but users and conventions can. With Git, you have to remember to push or pull all changes into the designated central repository — not hard to remember, especially if you support it with other conventions, such as only building releases from the central, but still an extra step. With Subversion, there’s nothing to remember or agree to: there is only one repository. By definition, anything that’s checked in at all is checked in to the central. One place where this can become particularly important is in “governance,” where external constraints like Sarbanes-Oxley or escrow contracts demand hands-off guarantees. On balance, enterprises with governance constraints value the guarantees of Subversion.

(Governance, traceability, ALM, and DevOps all require broader support than just the code and files, of course: there has to be integration among the code repository, the tests, the deployed product, and the tracking system. Fortunately, CollabNet now integrates both Subversion and Git with these other components.)

Somewhat paradoxically, there are times when you want to throw away (or keep private) some work. Git is better at throwing things away than Subversion is: you keep the potentially throw-away work in its own repository until you decide whether to make it official. If you decide to toss it, there are virtually no left-overs in the repositories you keep. By contrast, in Subversion, everything goes into the one central repository, and you don’t have that same option. Typically in Subversion, you don’t actually “throw away” such work, but only leave it on some branch you never look at. But it’s still there, taking up space, and possibly cluttering the history browser. The possibility of throw-away work is a fairly big consideration in open-source work (and in fact it was one of the key design considerations for Git), but rather less so for enterprise work (where throw-away work is also throw-away salaries, equipment, lighting, and all the other employee expenses), so enterprises typically avoid ever doing it in the first place. I wrote about handling throw-away work at some length a while back.

Some things are possible, but I wouldn’t recommend them — at least, not to someone who has to ask:

So, which one’s for you? Try a free, fully functional 30 day trial of Subversion and Git on CloudForge to help make this choice.