The Agile Coach on Focus

To me, nothing is more frustrating than context switching (i.e. multi-tasking). It takes away from our ability to focus. 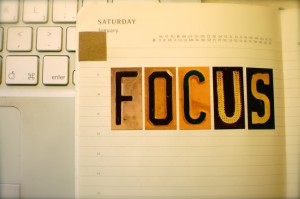 As a result we’re far less productive. We often produce more bugs, and are generally more stressed out.

You may have gone through this exercise (or one like it) in an Agile Bootcamp or Scrum Course; it’s called ‘Multi-tasking is worse than a lie’. Here’s how it goes…

Get a piece of paper and write the sentence: Multitasking is worse than a lie

Every letter you write, you should immediately write a number just below it, starting with 1 and going through to the number 27 as you reach the last letter in the sentence.  So you write “M” and then 1, you write “u” and the below it 2 and so forth.  You keep this up until last letter of the sentence and you time yourself.

Now try writing the sentence in full followed by the numbers 1 to 27 in full. Again, time yourself.

What I’ve found over and over again is that, on average, it takes just a little more than half the time in the second instance. We’re still doing the same amount of work, mind you.

Now think about how simple this exercise was. And about how complex the development of software is. And compound that by the number of projects and tasks you may be shuffling.

So the point is made, and everybody agrees that we need more focus and less context switching. And then we go back to our real jobs and get pulled in 10 different directions at once. It’s madness!

So why aren’t many of us willing to do something about it?

I spoke in one of my previous blog posts, ‘The Agile Coach on Courage’ about how standing up and telling your boss that you’re overwhelmed is hard, but necessary. It takes guts. Sometimes you’re being asked to be a member of several project teams at once. Other times, you’re being yanked off an active project (with little to no notice) to work on a pet project for a C-level executive. Telling your boss the consequences of such actions is hard to do, but necessary. And if they’re a good boss, they’ll actively listen to you, empathize, and try to remove any impediments that stand in the way of you getting work done productively and of the highest quality. True servant leadership.

But in order for them to help, you must let them know that this is disrupting not only your productivity, but the rhythm of the team as well.

Scrum Masters, listen up because this is on you as well. One of your major functions is to protect the team. So educate the Departmental Managers on the evils of context switching and multi-tasking. Press the issue tactfully. And if you don’t have enough people to get the work done, raise it as an impediment. Make it visible. Let it drive a discussion around the scope of the Product Backlog, the Release Backlog, or dates. Our velocity is what it is. You want to increase it? Adding more team members oftentimes won’t do it. In fact, it can even decrease velocity in the short term. So be careful of this tactic if you’re running up against a tight deadline. Let it be known that our team works at a sustainable pace. Yes, we can work longer hours from time to time when it’s really needed, but don’t let it become the norm and burn folks out. One of the telltale signs of this occuring is a spike in the number of bugs introduced, a simple metric to keep visible and discuss in your team retrospectives.

I’d like to hear your thoughts on this topic. How do you deal with context switching/multi-tasking?