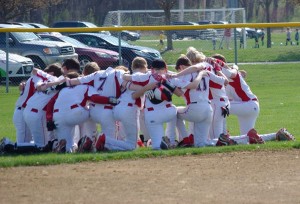 I have two young boys, both of whom play baseball. My wife and I are at the ballpark a lot. If you’ve got a ball player, you know how impossible it is to just be a bystander. There are so many games, they work so hard, and they only get so many chances to do something wonderful – it starts to get in your blood. You start wanting success as much as they do. You start coaching them in the car ride home, analyzing each swing, each pitch, each drop step in the outfield. You start to panic when they haven’t hit the ball for three games in a row.

It doesn’t help that I live in St. Louis, a city whose common denominator is the St. Louis Cardinals. The Cardinals is one of the oldest and winningest teams in baseball history. They are currently managed by Mike Matheny, the youngest manager in the MLB. Matheny was hired just a few years ago, and he was able to take the team to the post season in each of his first two seasons, and to the World Series last year. Earlier in his career he was a catcher for the Cardinals, but his only management experience consisted of coaching a youth baseball team. During his tenure in little league, he established what is now referred to as the Matheny Manifesto, a lengthy dissertation on his coaching philosophy. It started as a letter to the parents of the team he coached, but it has become popular among little league teams. Coaches will often ask parents to read it at the opening of the season to remind them to keep their priorities in check.

A few highlights from the manifesto:

If you have the time to read the entire seven page, 2700ish-word letter to the parents of his little league team, I highly recommend it. You’ll understand rather quickly who exactly he’s trying to coach. And it’s not the kids.

It’s These Parents That Need the Coaching, Not the Kids!

Organizations spend a lot of money, time, and energy reorganizing departments, implementing a new tool, or even adopting Agile in the hopes that such changes will improve the quality of the software they deliver, or perhaps make them deliver faster. These efforts are more often than not aimed at those that are actually doing the work. When I visit a client, I’m typically spending time with the developers, testers, and project managers. The thinking is that if they’re the ones undergoing the change, they’re the ones that should be trained.

But there’s a very important element of improving software delivery that isn’t being addressed in these training sessions: management. In the ball park, Matheny recognized that building a successful baseball team included training the parents. He saw that the parents need to learn how to be parents of little leaguers. In the world of software delivery, managers also need training – they need to learn how to be managers of Agile software developers.

“I am completely fine with your son getting lessons from whomever you see fit. The only problem I will have is if your instructor is telling your son not to follow the plan of the team.”

We can provide Agile training to our teams until they are experts. But if we can’t provide their managers the skills they need to steer them within the Agile principles, what value is the training? Teams are being trained to self-organize, but we expect managers to just fit in to that model. Teams are being trained to favor face-to-face conversations, but managers are still holding on to the chain of command. How can Agile teams be successful with such an uneven training plan?

If we expect Agile training efforts to pay off, we have to train the managers how to manage Agile teams.

At work, we think of training as a one-time event. We consider ourselves proficient in a particular software program because we went to training. On the baseball field though, the concept of training is completely different. It’s repetition-based. It’s taking 100 grounders, or throwing 50 pitches, or repeating a pick-off play over and over and over. Agile management training should resemble baseball training, with a lot of situational role-playing and repetition.

A baseball player would never think he was proficient at baseball because he went to a one-time training event. And his skills would deteriorate if he left the game for an extended period of time. Likewise, Agile management training should be an ongoing effort.

The primary lesson of the Matheny Manifesto is that parents need to back off. The kids will improve at a faster rate if they aren’t constantly pressured by their parents. If the kids are given the freedom to make mistakes, they’ll learn faster. But this is a difficult pill to swallow for many parents, so Matheny spends as much effort training them as he does his kids. The parents had to be trained so his kids could be trained.

I suggest we train managers of software teams to take the same approach. Agile managers should be trained to back off, let their teams make mistakes, and give them the freedom to improve. It’s the only way to make the team training effective.

What do you think? Managers, are you getting the training you need to manage your teams? Team members, do you feel your managers have the skills to allow you to be successful? Leave your comments below, or send me a note on Twitter at @johnkrewson.

Enterprise Agile Planning
Before we dive into the main subject of this blog post, it is importan ...
Read More
Contact Us