The Tibco Business Works plug-in manages the deployment of Business Works applications, application configuration as well as EMS Server artefacts such as queues and topics. The plugin leverages AppManager standard commands in order to create, update and delete Tibco BW and EMS components and eliminates the tedious scripts generally used to perform variable substitutions. Use XL Deploy to create insight in what version of each application has been deployed onto the different stages of your DTAP pipeline. Deploying the same application package to every stage in your DTAP pipeline greatly contributes to the stability and predictability of the result of a deployment. Use XL Deploy to define the different components such as your Tibco BW Engine (tibco.Domain hereunder) processes and EMS servers, two pieces of Tibco middleware involved in a typical Business Works setup. From an application perspective, define the various components of your Tibco application such as EARs, EAR configuration files, queues, topics and other EMS scripts. Variable substitutions for these different artefacts will be performed automatically with XL Deploy standard dictionaries, allowing environment-specific configuration. [caption id="attachment_7639" align="alignright" width="289"] 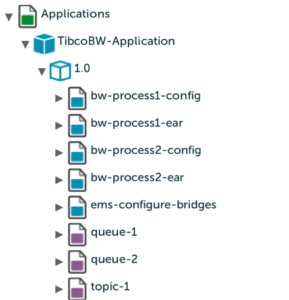 Tibco Deployment[/caption] As the plugin capture Tibco BW best-practices for the deployment of Tibco artifacts, XL Deploy will automatically sequence the deployment operations in the correct order. For example, a package composed of EARs, queues and topics, will typically produce a deployment sequence based on the following: 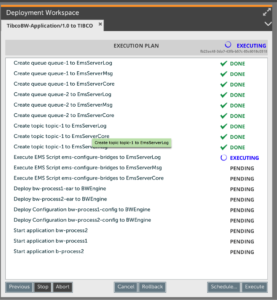 The various components of your Tibco BW application can consist of EAR packages, EAR configuration, queues and topics. Currently the Tibco integration supports the following components/tasks:All these artifacts support variable replacements, with deep-archive scanning. Furthermore, the plugin can easily be extended to meet your specific Tibco deployment requirements, for example:Besides deployment actions, the XLDeploy Tibco integration can also help the operator with basic administrative tasks like stop/start of Tibco servers, EMS servers and Hawk Agents. The Tibco BW plugin is available here : https://github.com/xebialabs-community/xld-tibcobw-plugin