An Agile Team Task by Any Other Name – A To Do 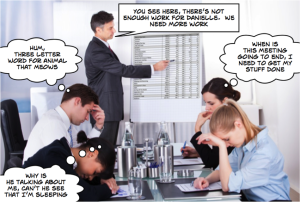 Let me first say, I know the idea of task decomposition is fairly well covered and some might call it a basic practice of any team; however, as a coach helping teams to adopt agile software development, I don’t always see teams finding this practice of defining “how to get to done” as a natural team planning activity. Instead, I see teams getting frustrated with a clunky approach or a high-level of disengaged team members or a member of the process police controlling the meeting that is distinctly a team meeting or I still see the “lead” define the tasks and simply dole them out.

Defining “How” to get stuff done as a team should be the straightforward activity around software development. It should be an engaging activity of brainstorming, learning, sometimes arguing, and ultimately a good feeling of “let’s git’r done.” All-too-often it seems like a torture technique riddled with challenges. These challenges are often rooted simply in poor practices, some of which include:

That last point about utilization, it seems like a frequent driver of the planning exercise. It’s odd in that sometimes people think that if we don’t have a plan with everything defined that we are going to do before we go do it; well — when the stuff we do get done is complete, we’ll simply stop working and sit there and stare at each other. I’m pretty sure that this is never the case and if it is, either get new people or look in the mirror.

Well, I have a few ideas for you to try — most of these are common sense and talked about by others, but it’s always good to mix it up and try something different to get out of the rut or remove the pain associated with planning.

First, abandon planning using ideal hours — I know, I’m crazy — but hear me out. The common rule for any to do or task is that it should take no more than a day to get completed, ideally less. Tobias Mayer’s book called The People’s Scrum contains a curated set of his past blog posts, one in particular called, “When is Scrum not Scrum?” explains his reasoning for non-estimated, day or less tasks — (1) eases tracking – just burndown tasks — the burndown is number of remaining open tasks and (2) it helps to unearth unforeseen impediments that are often just part of what we normally do. While these are great, I would add that focusing on estimates and accuracy of the estimates actually just results in taking the eye off quality and flow of value.

SPECIAL NOTE – If you are a VersionOne user and worried about not getting a burndown, try using just a “1” in for the Detailed Estimate and To Do.  This will, in essence, create a task count burndown.

Next, decompose just enough stories to commit to the goal and get started. The Scrum Guide is pretty clear about this:

Now, new teams may need to decompose all stories during a sprint planning, but teams that have been together for a while may be able to quickly determine what stories to do in the next two weeks, how they fit an incremental goal, and then just go. Don’t make your sprint planning meetings more painful — if you are planning for 2 hours and you have enough work to start the sprint, then go start.

Try different techniques for this meeting that encourage engagement. For example:

Taskstorming. A simple approach where the team selects which stories they are going to work on based on past velocity and then, interviews the Product Owner on each. During the interview, the teams is noting on sticky notes the tests and tasks. Once a goal emerges, then it’s time to task [and test] storm. On a whiteboard, write the title and draw a large box for each story. Now have the team place their sticky notes up on each story. Duplicates can be discussed as well as someone can put up something that doesn’t make sense to anyone else — well discuss it. Through this process, let the conversations flow – observe a story with a ton of task, then maybe it should be broken apart? Taskstorming not only makes the meeting more efficient, but it’ll make it more effective because everyone is involved and engaged in the process. At the end, have folks pair up and help get the data captured in your favorite tool (which means VersionOne).

Other techniques you can try include Task-n-Tell and Test First Tasking.

Finally, as I’ve mentioned in a couple past blogs, put this on the team – this is a team activity. If you are a team member, take ownership of this meeting and you lead it. The Scrum Master or Lead or Facilitator of the team would typically do this, but if you find them directing or assigning tasks out without engagement. Well you have a problem and the best way to change it is for a team member to take over. If you are a Scrum Master or Lead and you are struggling with getting the team engaged, try something new — don’t be insane. Try introducing a facilitation game or asking someone else to facilitate (not the product owner or anyone else in a position of authority).

No one should suffer through a sprint planning meeting. Yes they can be hard, but they shouldn’t be torture — so, inspect and adapt. Time to make them fun and effective.

Remember that at the end of the day, tasking is simply defining the proverbial “To Do” list to get a story done.