Can a Team be Scrum Without Retrospectives?

Sometimes Twitter is just a bunch of crap and noise. Other times, stuff comes over that you just can’t ignore. After we published the State of Agile report, I had one of those moments. It hit me after one dude tweeted something to the effect of: “How in the world can a team claim to be doing Scrum if they don’t practice retrospectives?” I couldn’t let this one go. I polled our staff of professional agile coaches. Within an hour, 6 of them had opinions on whether you can proudly call your team “Scrum” or even “Agile” without conducting regular continuous improvement procedures. Here I’d like to share with you some of our coaches’ opinions and recommendations – then find out your take. (ADHD moment: If you are new to agile or wondering ‘what is a retrospective?’ here’s a good explanation). Take this as FREE advice from our professional coaches. Normally you pay for this stuff so IF you enjoy it, you at least owe me a LinkedIn share or tweet @VersionOne. 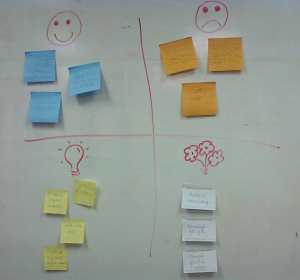 WHAT THE VERSIONONE COACHES SAY… “You can’t be ‘Scrum’ if you aren’t doing all of the practices of Scrum.” – Steve Ropa True. But I give this statement a big “So what?” Isn’t the goal of agility to create great software? If some part of Scrum doesn’t work for your team, should you do it anyway just so you can be Scrum?  In the words of John Pinette, I give this a “nay nay.” I recommend doing all of the practices to start with – and only removing or modifying practices when you find them to be unnecessary or even detrimental.

Ironically, teams usually come to that conclusion during the retrospective. You can be agile without retrospectives, but it’s a very, very rare team who can. I have run into a few. They’ve usually been doing XP for a while, and are always co-located.  Some teams did the retrospective because they were supposed to, but never really came up with anything new.  What they were able to do was to inspect and adapt at the drop of a hat. These teams also found that daily standups had become redundant.

“It’s the wrong question to begin with.” – Lowell Lindstrom

The question of whether or not a team can be “Scrum” is a red herring for a few reasons. First, due to the inherent inspect-and-adapt nature of Scrum, over time, no two teams will be identical and any given team may evolve in a way that makes one of the common or defined parts of the Scrum framework suboptimal. The classic example of this is task articulation and estimation in Sprint Planning, which many agile teams find is not necessary as they improve.

Second, there is no one person who can designate whether or not a team is Scrum, leaving any assessment to the discretion of the assessor. Across experts in the various Scrum communities there is a little consensus. This is due largely to the first point, i.e., the fact that each person’s opinions will be shaped by their experiences. And these are inevitably different. It’s worth noting that the original definition of Scrum didn’t even include retrospectives.

The patterns and papers from the mid-’90s, and Ken Schwaber’s first book on Scrum (2001) make no mention of retros. The focus was on the product with the Sprint Review at the end of each Sprint, but no explicit reference to the team’s PDCA. Similarly, the original definition of Extreme Programming (XP) did not include retrospectives. In 1999/2000 as XP was gaining in popularity, Norm Kerth was writing his book Project Retrospectives: A Handbook for Team Reviews.  Although focused on larger, longer projects and the difficulty of learning what really happened, the ideas resonated strongly with the XP community and we soon saw the practice added to the XP list. The Scrum community followed suit and in Ken’s next book on Scrum (2005), we see retrospectives become part of the framework as we know it today.

So, were teams doing Scrum from 1993-2005 not considered ‘Scrum teams’ because they didn’t do retrospectives? Of course they were; it’s a silly question. What we can say is that the Scrum community and its leaders have found that the most hyper-performing teams reflect on their practices with a tenacious attitude toward improving the way they develop. Most do this through the construct of the retrospective. However, doing retrospectives well is difficult and depends on a culture that values learning.

So, if my retrospectives suck and yield no improvement, then am I really any closer to being Scrum than if I do not do them at all?  I would argue: No.  Is a team who uses most of the Scrum framework but not retrospectives, integrating PDCA into their daily work as the Kanban community advocates, still a Scrum team?  I would argue: Yes. Any discussion centered on “being” Scrum or “doing” Scrum should explore whether a practice improves a team’s performance, the different scenarios and conditions required for a practice to thrive, and the substitutes that might make a practice replaceable.

“Retro is a key ceremony. You cannot be ‘true’ Scrum unless you follow the framework as it was designed.” — Jo Hollen

You can, however, be “ScrumBut”… and realize some value from your partial Scrum efforts. Going back to agile and Lean principles, the notion of continuous improvement is very foundational. Without retrospectives, I would be concerned about how the culture is addressing the principle of continuous improvement. Do such organizations have other methods through which they can incorporate team feedback and address improvement?

Maybe the more interesting examination is why do they NOT want to do a “retrospective” – or not think they need to?  I’ve seen where they were done as part of the process, but often I felt they were not very effective in many teams.

First, it must feel totally safe to bring up something that is not going well. Many cultures still want to immediately find a person to blame for the “problem.” If anyone feels unsafe, the retrospective will be superficial. Nothing useful will come from it, and the team will quickly find the retro a waste of time. Even if a team gets to the point of bringing up real issues, there must be a spirit of appreciation for the input – then real results and follow-through. If nothing ever comes of the feedback, it will quickly stop. Besides, if results are not implemented, then there is no improvement anyway (thus, another waste of time).

Or maybe the team feels that everything is fine. REALLY??? Nothing can be improved? (Maybe you should hire them for coaches then). Even the highest-performing teams will find things that can be improved. But, maybe every two weeks feels too often? Maybe they should do a health-check/status and a deep-dive examination every few sprints. Agile requires some form of engagement and commitment to continuous improvement.

“You can’t be ‘Scrum’ without the ‘Scrum’ ceremonies.” – John Krewson

You can be agile without the ceremonies so long as you’re adhering to the principles, but “Scrum” asserts certain ceremonies as part of the framework. Those ceremonies, retrospectives included, are intended to uphold the theory of empirical process control upon which Scrum was built. I refer to retrospectives as the “missing agile value” and have a blog post coming out soon to address this.

As you’ll see in John’s blog post, from an organizational perspective, learning always precedes agile maturity. I’m also planning a blog post specifically about expanding retrospectives past the team level and embracing them at all levels in the organization, including (or especially) at the upper-management level.

To me, one of the most critical aspects of agility is learning; i.e., at regular intervals, the team reflects on how to become more effective, then tunes and adjusts its behavior accordingly.

Maximizing learning is also a key Lean concept. I think people tend to get so hung up on processes and how to do things that they forget why they’re doing them in the first place.  But to answer the question directly, if you’re not doing retrospectives not only are you not doing Scrum—you’re not really agile if you aren’t making time for learning. Teams typically stop doing retrospectives because they’re difficult. Once you’ve addressed the low-hanging fruit, it gets complex to address the real hard stuff (people issues, organizational dysfunction, etc.).

“Not doing retrospectives suggests the plan must be perfect.” — Michael Moore

I would say that this is not specific to Scrum so much as it’s one of the principles of agile to inspect and then adjust/tune.  This principle goes beyond agile even; I’m not sure I’ve seen any good improvement method that doesn’t include some sort of periodic reflection and adjustment, whether it be self-improvement or organizational. Not doing retrospectives suggests that there is no need for adjustment, which means that the team and plan must be perfect.  If they aren’t, however, this activity is essential to maximizing effectiveness. Of all the principles, this is the first that should be implemented, regardless of the method. From this principle, all other principles and practices are discoverable.

WHAT’S YOUR OPINION?  Can a team be Scrum or Agile without retrospectives? Join the debate by leaving a comment below. Better yet, subscribe to this blog; several articles addressing this topic are on deck from our coaches in the upcoming Agile Chronicles. We’d like to hear from you!