You know how to spot when a release is in trouble. You see delays, tasks failing, overdue deliverables, etc., and know that you need to take action to get things back on track. But what about when you’re managing many releases at once? Some teams might have dozens or more releases all running at the same time, all with complex dependencies on each other.

When you open your computer first thing in the morning and have 40 releases to review, how do you know which ones need your attention most? Some are going to be fine, running along without a hitch. But others might be at risk for delay or even failure. A good release manager can assess each release – she knows what has caused problems in the past, what indicators to watch for as signs of trouble. But it takes time to do that for scores of releases. Wouldn’t it be great if your release automation tool could understand the risks your releases face just like you do and make that first check for those warning signs for you?XL Release Risk Intelligence does just that. An assessment of every running release, it assigns a score from 1 to 100 to represent the riskiness of the release at that moment. Score less than 10 and you can rest assured that the release is right on track and doesn’t need your attention at all. From 10 to 50, you might want to keep an eye out for certain factors that suggest problems. Releases in the 50 to 100 range have multiple issues threatening the success or timeliness of the release. With these assessments, you can decide where to put your energy – spend 5 minutes tracking down the problems with the riskiest release instead of an hour to look over everything.

What do we measure?

XebiaLabs has been helping teams with their DevOps transformations for more than 7 years. Over that time, we’ve learned a lot about what indicators predict risk in a release. From that experience – and with input from many of our current users – we designed a 6-factor risk assessment. It looks at release and task flags, failed and retried tasks, and date-related factors to assign the risk score for each release. When we sort a group of releases by risk, we use a two-pass sort to bubble the most risky releases to the top of the list. First, we sort by the maximum risk value: if a release only has one risk factor but it’s a biggie (a red flag, for example), that release represents significantly more risk than releases with multiple lower risk factors. If more than one release has the same maximum risk, we then compare the total risk values to determine which is riskier. Whatever order they are listed in, we let you see exactly what factors went into a release’s risk score. [caption id="attachment_14874" align="alignnone" width="338"] 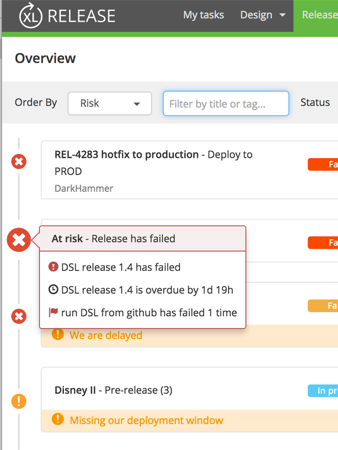 Where can you find the risk assessment?

In XL Release 6.2, the risk score is used on the new Release Overview page (see the next figure). Along the left side of the screen, colored indicators draw your attention to the risk of that release; from green for a healthy release, through yellow for moderate, to red for the releases that are at the most risk. If you click on the risk indicator for that release, you can see additional detail on the factors contributing to that release’s risk.

What’s coming in the future?

The Release Overview gives a helpful ranking of releases by risk and helps you quickly see what’s making a release risky. In our next release, we plan to include a new dashboard tile that you can add to any release dashboard to see even more detail on the risk factors present in your release as it’s running.   [caption id="attachment_14875" align="alignnone" width="975"] 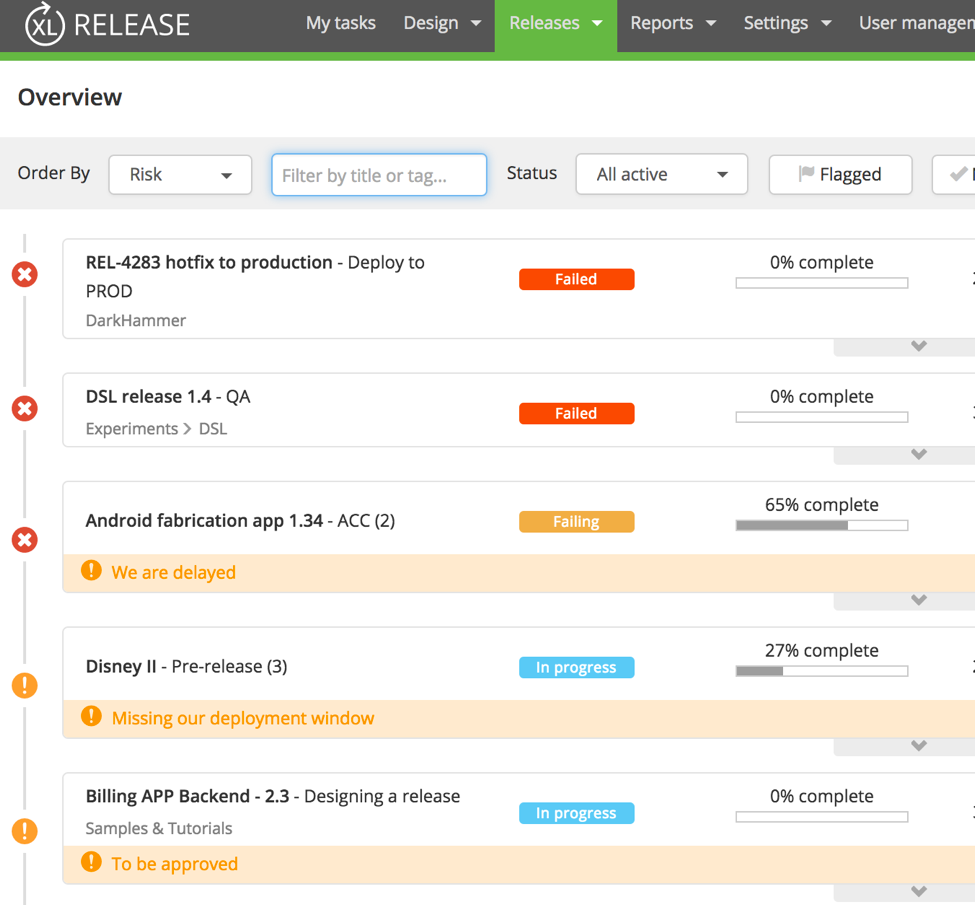 New Release Overview page (detail)[/caption]     Finally, while the risk assessment is based on factors that we’ve seen indicating release risk over our many years of helping companies successfully implement DevOps, we know that not every team assesses risk the same way. Some might be heavily date driven, and delays are the most critical problem. Others are highly automated, so dates are less important than failing tasks. Whatever type of releases you manage, we want you to be able to define your own risk profile and use that to rate releases. We plan to make the risk assessment service itself extensible, giving you lots of flexibility in tuning risk scoring and even adding your own custom attributes to measure. We want the risk intelligence capabilities of XL Release to be an extension of your own skill at assessing releases based on the factors that matter most to you and your teams.