The attendees were eager to get started. An exceptional collection of agile development experts were poised to share knowledge, excite, inspire and persuade.

After sharing logistics and speaker introductions, it was time to get out of the way and let the learning begin.

Before the stage was yielded to the keynote speaker, Santeon Group’s Ahmed Sidky, I asked the Portland audience a question:

“How many in the audience had participated in an Open Space?” 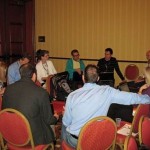 The Portland Agile Community was eager to participate in Open Space.

A stark silence gripped the room as two lonely hands reached up.

With the Open Space comprising the entire afternoon schedule, I was concerned:

The morning prepared speech portion of AgilePalooza Portland began to be delivered. Ahmed Sidky, Diana Larsen, Dave Sharrock, Michael Tardiff and Steve Ropa connected effectively with the eager minds who had taken time out of their busy lives to learn agile for the first time or to ‘sharpen the saw.’

As the attendees finished lunch, we put the finishing touches on the Open Space preparations and gave control of the event to Diana Larsen, the Open Space facilitator for AgilePalooza Portland.

While Diana Larsen briefed the group about Open Space, I glanced around the room and observed one thing:  a full house!! The inexperienced ‘Open Spacers’ were willing to give it a shot. And I am glad they did.

The topics were selected and the discussions spread freely and easily:

For the next two-and-a-half hours, project managers, developers, testers, development directors and product managers learned, pushed, pulled and debated the issues that mattered to them most.

A beginner ScrumMaster asked, “How do I get better engagement for the Scrum Team?”

It was a great AgilePalooza Portland and a buzz-worthy Open Space. Thanks to the Portland community for embracing the event and expanding the collaborative power of Open Space.