The 4-Step Action Plan for Agile Health: Step 3: Understand how to use additional enablers of Agile Health

In my blog on From Agile Pathologies to Agile Health I explained that some “agile” teams suffer from the following common pathologies, i.e., major dysfunctions in practicing agile methods, while claiming that they are “doing agile”:

While an agile team may not be exhibiting gross dysfunctions (pathologies) listed above, it may still behave in harmful or unhealthy ways that would prevent it from realizing the benefits of agile development, such as higher productivity, throughput and quality.    Absence of major pathologies or sickness doesn’t imply health; agile teams may still not be healthy due to one or more harmful behaviors.

In this 4-part blog series, I focus on 6 harmful behaviors exhibited by agile teams and how to move away from them, and transition to 6 healthy agile-lean practices in order to get more benefits (improved productivity, throughput and quality).  I also present 4 specific steps to transition to healthy agile-lean practices.   Table 1 summarizes these 4 steps, and labels 6 harmful behaviors (as 1B through 6B) and 6 healthy agile-lean practices (as 1P through 6P) for ease of cross-referencing. Table 1 also indicates what is covered in each of the 4 parts of the blog series: Part 1 and 2 (highlighted in light green color) were completed.    In this Part 3 (highlighted in pink color), Step 3 – understand how to use additional enablers of agile health – is described.  Parts 4 will be presented in the future. 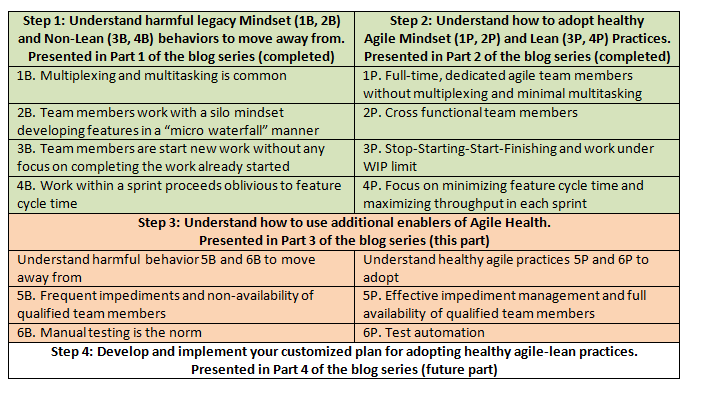 In Part 1 of this blog series, I used an example of a typical 4-week (20 workdays) sprint for the Struggling Agile Team.  Figure 1 illustrates the Sprint History Map of this 4-week sprint for the Struggling Agile Team after the sprint is over.   This Figure 1 is a revised version of Figure 1 of Part 1 as it shows the effects of two additional harmful behaviors, 5B and 6B, described below. 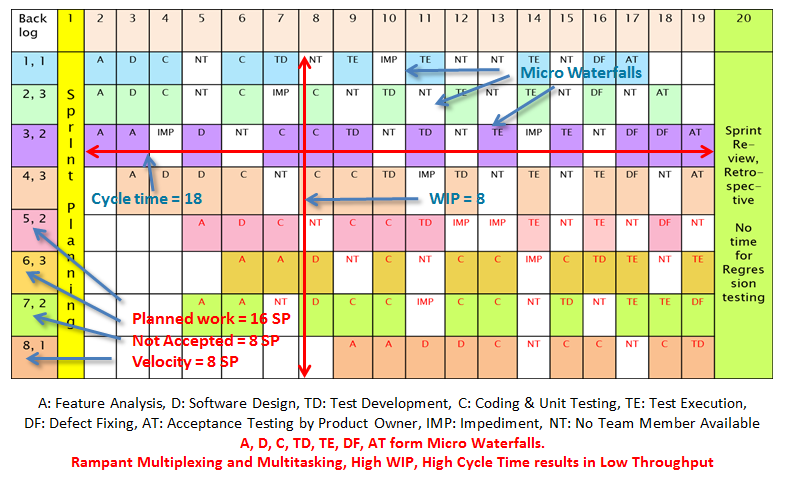 5B. Frequent impediments and non-availability of qualified team members:   With struggling agile teams, there is often no disciplined way to minimize and manage impediments.  Team members (especially contractors supplied by an off-shore vendor) are reluctant to bring impediments to the attention of ScrumMaster in a proactive manner.  ScrumMaster may have difficulty in removing organizational impediments.  More importantly, the team may not have the required training and norms to prevent or minimize the impediments in the first place by taking timely proactive actions to resolve issues to prevent them from becoming impediments.  As a result, the number of impediments experienced by the Struggling Agile Team is rather large (as shown by 9 impediments — marked as IMP – on the Sprint History Map of Figure 1).  Furthermore, impediments may take substantial time to be removed, which holds up the work.

As shown in the Sprint History Map in Figure 1, a rather larger number of 32 cells are marked as NT (No Team Member Available) events because of frequent non-availability of qualified team members.   These members may be busy on other projects or teams due to multiplexing, or busy with other features due to multitasking, or are interrupted by customer support work or customer demos.  Members that may be available are not qualified or ill-prepared to do work outside their area of expertise due to the silo mindset.

Although it can be argued that NT events is an example of impediments (as no work can proceed due to non-availability of qualified team members), it is important to differentiate between NT events from general impediments to understand the gravity of problems caused by non-availability of qualified team members and then take appropriate actions to correct or mitigate that problem.

As shown in its Sprint History Map (Figure 1), the Struggling Agile Team planned 8 features, but could complete only 4 features (Features 1 through 4).  Four features (Feature 5 through 8) could not be completed.

In Part 2 of this blog series, I used an example of a typical 4-week (20 workdays) sprint for the Healthy Agile Team. Figure 2 illustrates the Sprint History Map of this 4-week sprint for the Healthy Agile Team after the sprint is over.      This Figure 2  is a revised version of Figure 1 of Part 2 as it shows the positive effects of two additional healthy practices, 5P and 6P, described below. 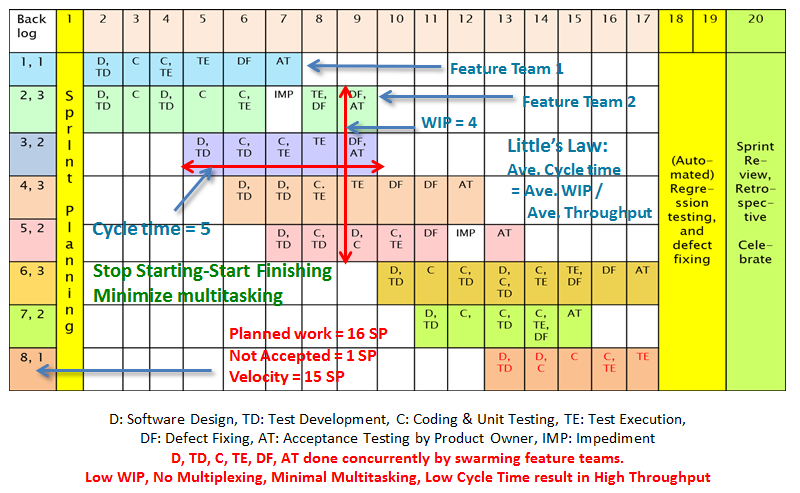 6P. Test Automation: Evermore regression testing is required in each successive sprint to ensure that the functionality built during past sprints is still intact and has not been broken, i.e., hasn’t regressed.  Unit tests are automated by following the practice of Test-driven development, and acceptance tests are also automated.  These two classes of automated tests are added to build the growing automated regression test suite.  It now becomes practical to run ever larger number of automated regression test cases on Day 18 and 19 of a 4-week sprint by using computers (typically virtual machines) as shown in Figure 2.   Although it is not possible to automate every test case, such as usability testing that involves subjective judgment, a vast majority of test cases are automated by the Healthy Agile Team.

Now let us take a holistic view of all 6 harmful behaviors to move away from, and 6 healthy agile-lean practices to adopt.

Six harmful behaviors feed on each other to create more harm:  When multiplexing and multitasking is common, team members get distracted and lose productivity, which reduces throughput and increases NT events (work cannot proceed due to non-availability of qualified team members) as team members get pulled off to work on other multitasked work.   When team members work with a silo mindset and don’t have skills or inclination for cross-functional work, there are many NT events.  When team members have no focus on completing the work already started, WIP goes up, cycle time goes up, and throughput goes down.  Lack of test automation (manual testing is the norm) also reduces productivity and makes regression testing almost impossible in each sprint, which reduces quality.     As a result of all these 6 harmful behaviors, the Struggling Agile Team could get only 4 features (Features 1 through 4) accepted in the sprint representing a velocity of 8 story points.  The remaining 4 features (Features 5 through 8) could not be completed within the sprint.  A struggling agile team may continue to struggle into a downward spiral, until and unless it starts moving away from harmful behaviors and start following healthy practices.

Six healthy agile-lean practices feed on each other to create increasing benefits:  When multiplexing is avoided and multitasking is minimized, team members increase their productivity due to single-team loyalty and by not wasting time on context switching, which increases throughput and reduce NT events.     As teams develop and use cross-functional skills, NT events reduce dramatically as at least one team member is almost always available to do any work (each member is a Master of One and Jack of Two).  As team members follow lean mantra of Stop-Starting-Start-Finishing, and work in a highly focused way, WIP goes down, cycle time goes down, and throughput and quality go up.   As manual testing reduces, and Test automation increases, it increases productivity and makes regression testing possible in each sprint, which improves quality.      Instead of struggles caused by harmful behaviors, an agile team starts experiencing an upward spiral of improved health and consequent higher productivity, throughput, and quality.  As a result of all these 6 healthy-lean agile practices along with the practice of sprint pipeline, the Healthy Agile Team was able to get 7 features (Features 1 through 7) accepted in the sprint representing a velocity of 15 story points.  Only one feature of 1 story point (Feature 8) could not be completed within the sprint.   6 healthy agile-lean practices synergize to create more positive benefits. Success feeds on success

Are any of the 6 harmful behaviors causing serious challenges and issues in your organization?   Are any of the 6 healthy agile-lean practices giving your team tangible benefits or of interest to you for your adoption?

I would love to hear from you either here or by e-mail (Satish.Thatte@VersionOne.com) or on twitter (@smthatte).

Part 1: Understand harmful legacy Mindset and Non-Lean behaviors to move away from

Enterprise Agile Planning
Before anyone had ever heard of COVID-19, businesses across the globe ...
Read More

Improve visibility, reduce costs, and take back control of your scaled out container and cloud deployments with the latest releases of Digital.ai Agility and DevOps solutions