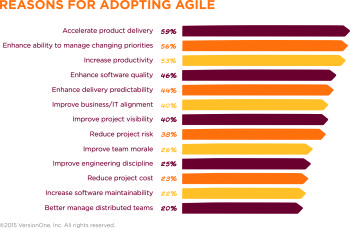 According to the 9th annual State of Agile™ survey, more organizations are adopting agile in order to improve productivity:

“Consistent with last year, most respondents adopted agile practices to accelerate product delivery (59%) or enhance their ability to manage changing priorities (56%). However, in 2014, productivity (53%) has moved into the top 3, outranking last year’s #3 response – improved IT and business alignment.”

This made me wonder why there is a perception that if companies transition to agile, teams will be more productive. I put my waterfall hat on and read the twelve principles that support the Agile Manifesto from a traditional stance. I could see where delivering working software frequently and at a sustainable pace speaks to teams being more productive in agile.

For example, a project that is managed with a traditional waterfall process has big upfront design and is transitioned over to a team that knows they have six to nine months to produce the software. At the beginning of project, the teams are more relaxed and moving slower. The intensity level and sense of urgency is a lot lower. Then as time goes on – three months, six months – the teams and management start to miscommunicate and stop being as diligent about status meetings. Near the end of the project suddenly the pressure and a bit of panic set in. Teams and management are panicking because now they have to scramble to get the software finished. Maybe this is what creates the perception with waterfall that your teams are not constantly producing software; there’s an ebb and flow.

Waterfall projects start out with very low intensity. By the end of the project the intensity is extremely high and teams are burned out because they’re working crazy hours. The teams are producing low-quality code because they have to rush and the code isn’t being tested. The low quality work damages the team’s pride, which decreases morale and can lead to turnover.

The benefit of going to agile is that the team maintains a constant level of intensity and consistent working hours, which in turn empowers the team to produce beautifully working software at a constant pace.

So when people are saying “productivity,” what I think they really mean is “intensity.” If we’re maintaining a constant level of working hours, a constant level of quality and a constant level of delivery, teams are happier, they’re proud of their work and they enjoy going to work. This is super important because keeping good developers is really difficult. If good developers aren’t happy they can easily leave and go somewhere else. That’s why 26% of respondents to the 9th annual State of Agile survey said improving team morale was the reason they adopted agile.

That’s my take on why there is a perception that agile is more productive than waterfall. When I saw the 9th annual State of Agile survey, I was curious about why people felt that if they moved to agile their teams were going to be more productive.

Why do you think there’s a perception that if companies go agile, teams will be more productive?

State of Agile is a trademark of VersionOne Inc.