More than ever, our customers are realizing that pushing software from their engineers’ laptops directly to Production has become a common – and highly efficient – method of delivering software. At the same time, more and more people from across the organization are participating in the release process. In addition to release managers and developers, auditing officers, business stakeholders, ops engineers, and security consultants are increasingly more involved, and all have crucial roles. And of course, frequency of releases is going through the roof too. 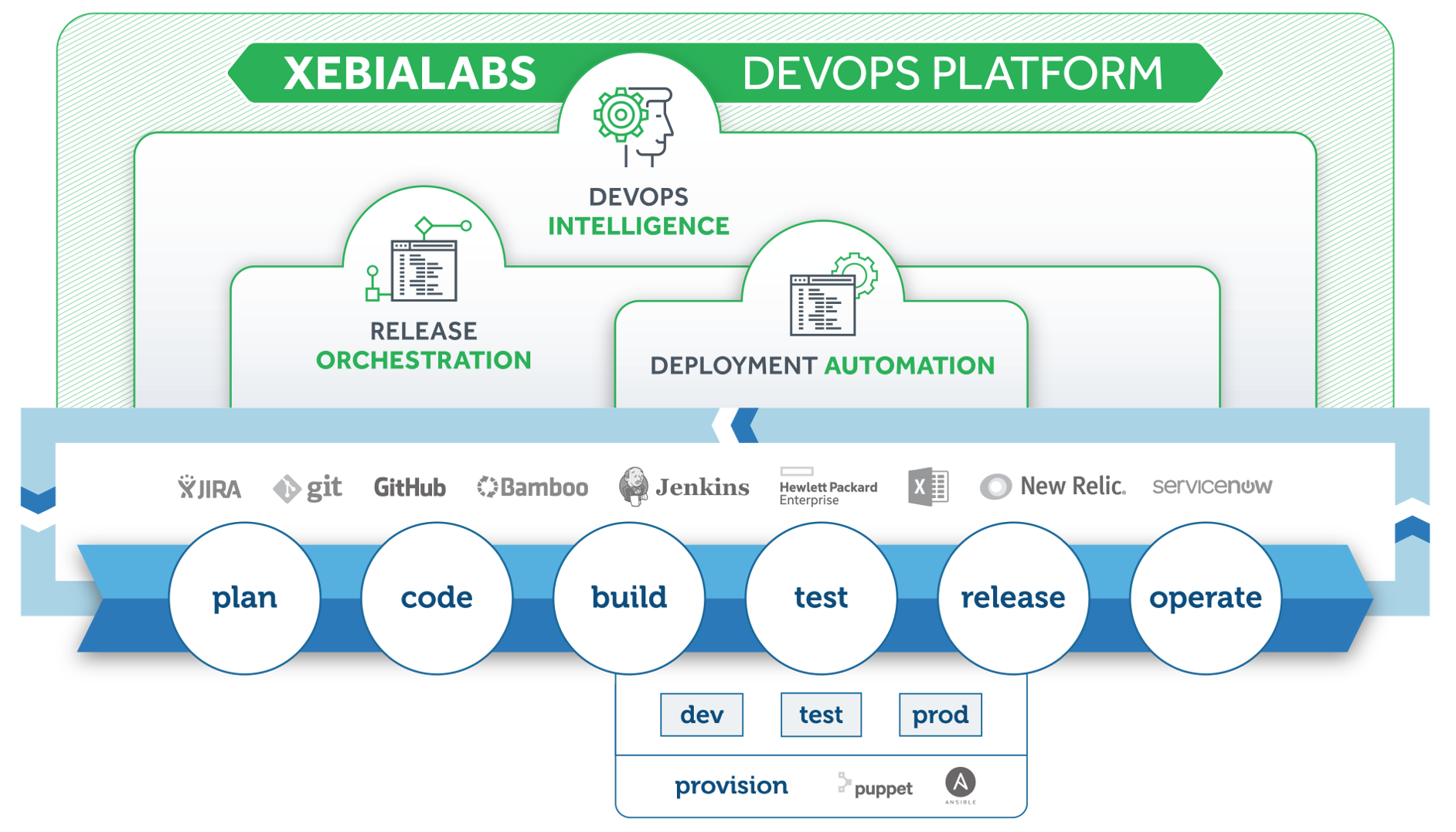 The XebiaLabs DevOps platform provides the backbone for DevOps release automation, complements existing tools, and enables full visibility across the entire software delivery process[/caption] These changes are resulting in a lot of complexity and opportunities for gaps in communication and awareness. Older, centralized models of planning are no longer effective. As different kinds of organizations transform into digital enterprises, they are discovering that, with these increases in both complexity and people involved across the enterprise, it's becoming even more critical to have good insights into what's going on. Without visibility, control, and the ability to scale across the enterprise, DevOps initiatives are destined to flounder. To meet these challenges head-on, we’ve made a few changes to our XL Platform that enable organizations to scale DevOps all the way to the enterprise level.

New and improved features in XL 7.5

10x or better! Performance improvement in Both XL Release and XL Deploy

Many of our customers are facing a dramatic increase in number of deployments; some go up to a thousand deployments per week. While this is a positive trend that is the result of continuous improvement and automation of the existing delivery processes, it’s one that can be difficult to manage without high-performing tools. This is why we’ve made continued performance improvements a priority for this version of XL Deploy. To enable quick and valuable insights, we’ve improved the underlying data processing flow, allowing users to do searches and create dashboards in seconds. Now, the ability to easily filter and quickly access different cross-sections of the data is at your fingertips. We’ve also improved the reporting performance in XL Deploy, making it anywhere from 10x to 100x faster, depending on which tasks are being performed. And XL Release 7.5 is 10x times faster on average as compared with 7.0!

As our customers continue to increase the amount of critical software they release using the XL Platform, they need more streamlined and secure access. To make logging into the platform easy, we’ve added a Single Sign-on feature for XL Release and XL Deploy. Just use the corporate setup of your Active Directory or LDAP, and manage access to your XebiaLabs systems via your existing set of roles and authorizations. With the new Single Sign-on capability, you also have the option of applying your organization’s existing multifactor authentication protocol to XL Release and XL Deploy. Particularly in environments where SOX compliance is crucial, these small features will greatly improve auditability. 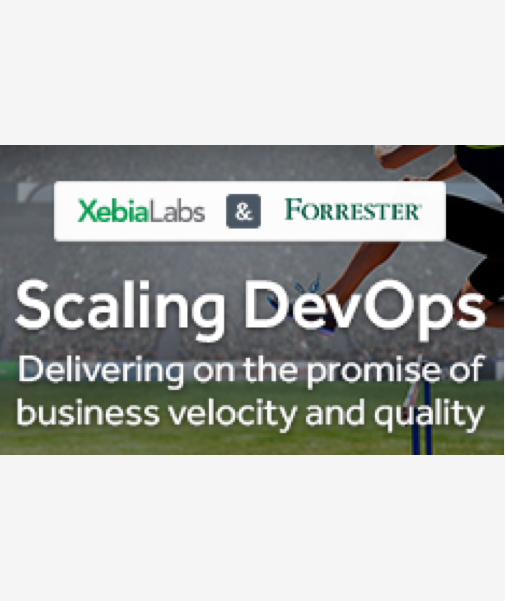 Scaling DevOps – Delivering on the Promise of Business Velocity and Quality

Groundbreaking technologies are driving innovative business models across every vertical. Hear Forrester analyst and DevOps expert, Rob Stroud, explain how even the largest enterprise can succeed with innovation at scale while accelerating release velocity and delivering high quality, low-risk software.

As you automate your DevOps pipeline, nothing is more important than understanding what will happen and when during deployments. To make this information more visible, we’ve added a minor feature with major impact: when XL Deploy is in preview mode, you can now easily relate the steps in your deployment plan to the deployables and the environment. Traceability is easier than ever before. Simply click through your deployment plan to discover the order in which the deployment steps will happen.

XL Deploy: Easily support your team with “View As”

Adding users to XL Deploy means that the team that supports the system will get even busier. Fortunately, the new  “View As” feature allows your administrators to view the repositories as another user, which helps them more quickly find root causes and solve problems.

If you orchestrate all of your releases via XL Release, and Continuous Delivery is crucial for your business, then you must ensure that your setup is robust and scalable. The new Active-Active mode lets you run multiple instances of XL Release in a cluster to ensure high availability. From a user perspective, nothing changes.

On top of all the “DevOps at enterprise scale” features we’ve added, there’s also a great new feature for engineers in XL Release: a new and improved inline code editor. We strongly believe that XL Release connects different worlds - from engineering, risk, compliance, and release management – and all parties are of great importance for success. To support all types of users, we introduced the concept of Dual-mode DevOps in XL Release in January of this year. Dual-mode features let users choose the method that works best for them – they can define releases using the simple user interface, or they can write code instead! [caption id="attachment_17475" align="aligncenter" width="934"] 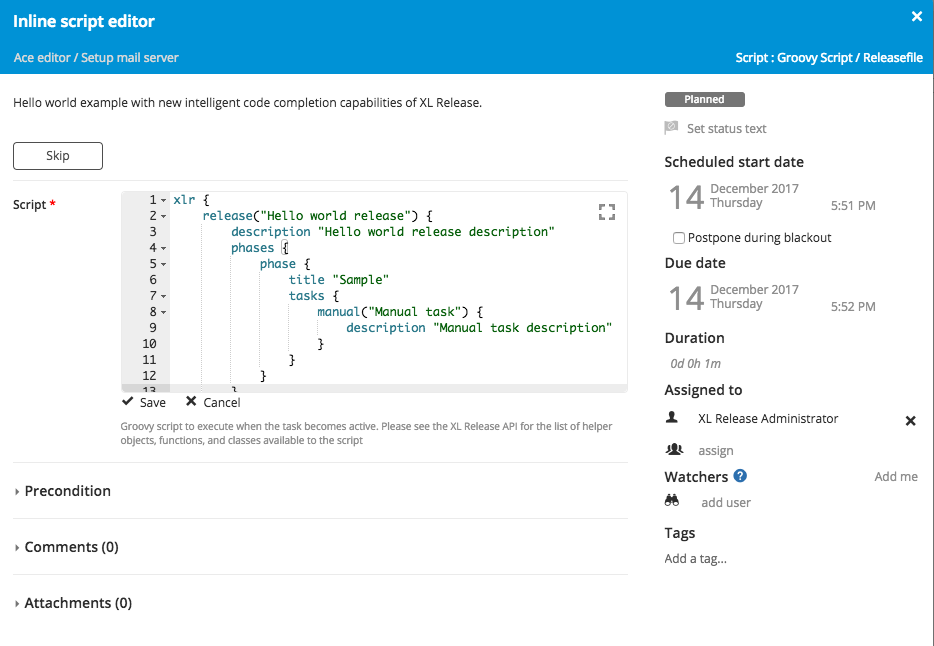 In June of this year, XebiaLabs pioneered the concept of Risk Intelligence to help teams monitor releases at scale and focus their limited attention on areas of greatest need. Version 7.5 now introduces the market’s first-ever Customizable Risk Intelligence, which makes risk management and mitigation even more targeted and efficient. [caption id="attachment_17474" align="aligncenter" width="1162"] 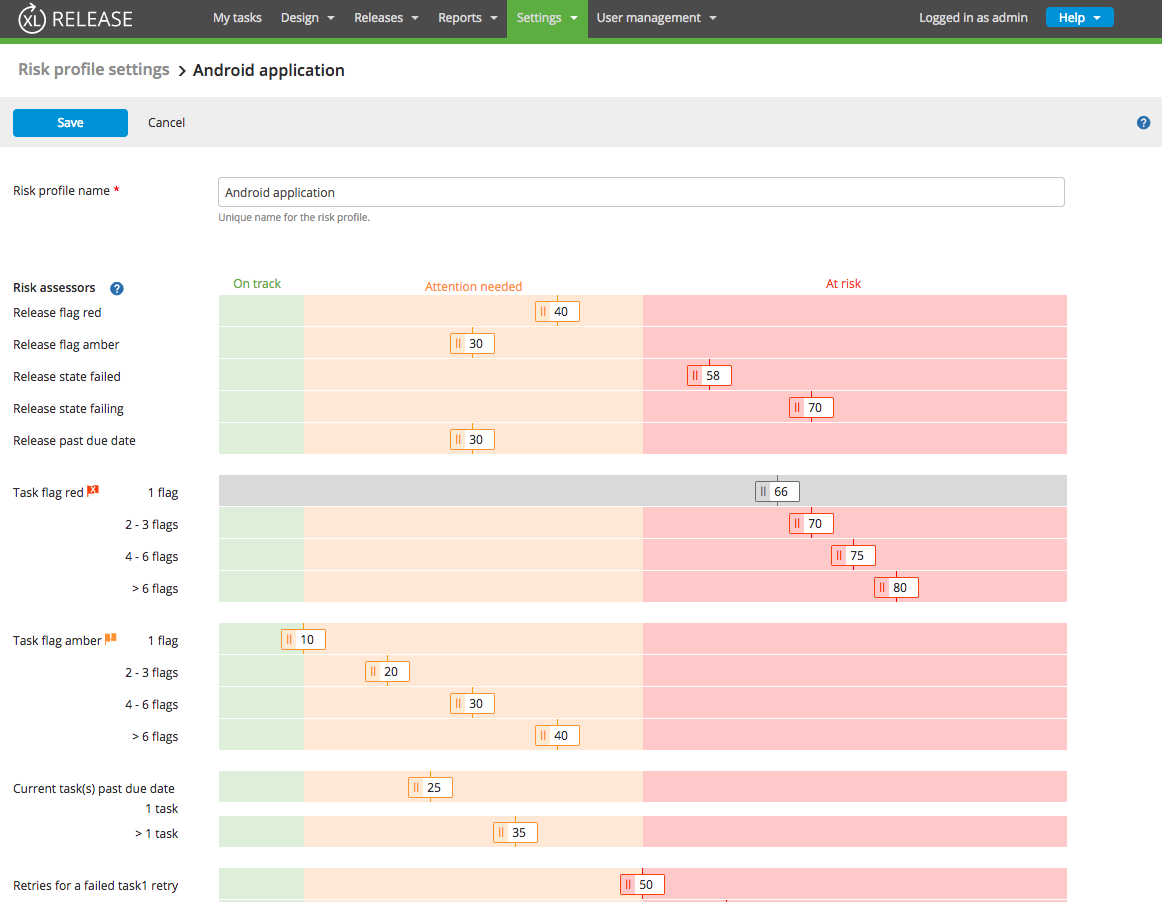 The XebiaLabs DevOps Platform version 7.5 introduces the market’s first-ever Customizable Risk Profiles, allowing organizations to create specific risk profiles that define risk thresholds for each release[/caption] Not all release circumstances are equal, and different circumstances demand different responses. For example, retrying failed tasks during a release to a Development environment might not be a cause for concern; but retrying tasks when releasing to Production signifies trouble. Now organizations can customize specific risk profiles for their releases and release templates, so their risk notifications are even more targeted and relevant. Team members receive alerts that take the context of the release into account, allowing them to take the appropriate actions for that particular situation. Customizable Risk Intelligence helps teams accurately identify and evaluate risk in all of the different situations that their organization faces – and spend their limited resources accordingly. This added layer of automated governance and control helps the compliance and audit teams sleep better at night as well!

Helping our customers transform to modern IT

One thing is certain: the DevOps technology stack is continuously expanding, and enterprises need to be able to easily adopt the latest technologies to stay competitive. XebiaLabs has always provided expansive support for the DevOps ecosystem. We want to continue to help our customers take advantage of the latest and most modern technology, so we’ve made it a priority to provide seamless support for the most popular cloud and container platforms for XL Release and XL Deploy. With 7.5, XebiaLabs delivers a host of new and enhanced plugins to ensure seamless operation, including connectors for OpenShift, Kubernetes, Docker, Azure, AWS, and VSTS/TFS.In fact, in 2017, XebiaLabs added support for 16 new cloud and container technologies: AWS EBS, AWS VPC, AWS ECS, AWS S3, AWS RDB, AWS Lambda, Amazon API, Gateway, Azure Compute, Azure Container Instance, Azure Functions, Azure Blob Storage, Azure App Services, Kubernetes, Google Container Engine (via the Kubernetes plugin), and OpenShift. We will continue to add new and exciting capabilities that are essential for enterprises to successfully automate and scale their DevOps pipelines. Keep an eye on this blog to learn about ongoing innovations!