For a deployment, XL Deploy calculates the step list based on your model. But what if you want to add an extra step? There are several ways to do this. This cookbook entry will explain a simple case: executing a remote shell command on a server. In this example we will show how to add a step to log the disk usage using the df command. We will do this using the Command Plugin.

When to use the Command Plugin

As said, you can add a step to the step list in several ways. Choosing the command plugin has the following implications:

We will assume a simple setup for the PetClinic war, that will be deployed to a Tomcat server. When doing a deployment, we have the following steps.

To monitor the target server's disk, we want to add a step that displays the output of the df command at the end of the step list. We will add this step in three stagesWe will be adding the command using the Command Plugin. Make sure the command-plugin-X.jaris copied to the plugins folder of the XL Deploy Server home directory.

Adding the command in the UI

Go to the Repository tab, find the PetClinic-war under Applications, and right click a version to add a new command. 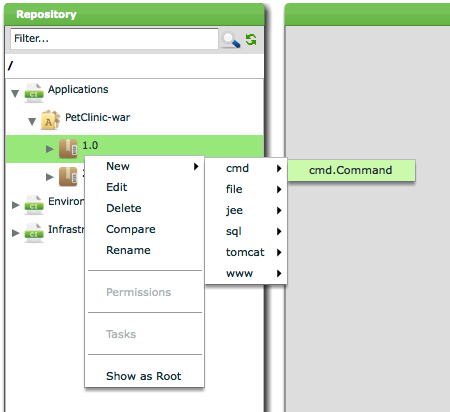 We will name the command 'Log Disk Usage' and issue df -H. 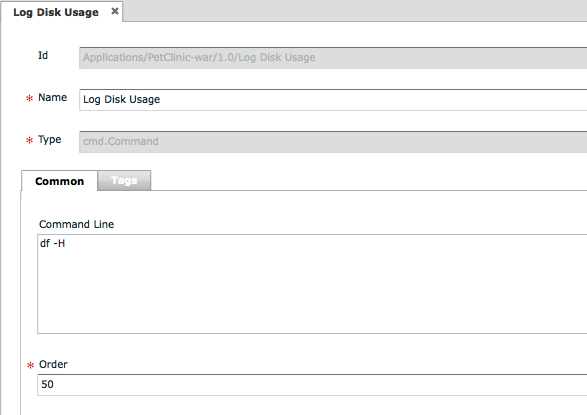 After saving, the command is ready to be used in a deployment!

Testing and refining the command

Go to the Deployment tab and start a deployment of the version you just added the command to. In our case, that would be deploying PetClinic war 1.0 to Tomcat. Note that the command will be mapped to an Overthere Host, so make sure the environment you deploy to contains the overthere.SshHost (or equivalent) Tomcat is running on. When doing a deployment, we will see that the step has been added:

Don't start the deployment just yet -- we want to to move the step to the end, so we will see the disk usageafter deployment. The steps in the step list are ordered by weight. As described in the Steplist section of the Reference manual, plugins contribute steps with order values between 0 and 100. So if we want to move the step to the end of the list, we have to change the order value to 100. Go to the Repository tab and open the Log Disk Usage command. Change Order to '100' and save. Now redo the deployment and we will see that the step has moved:

When executing the deployment, we will see the output of the df command in the logs: 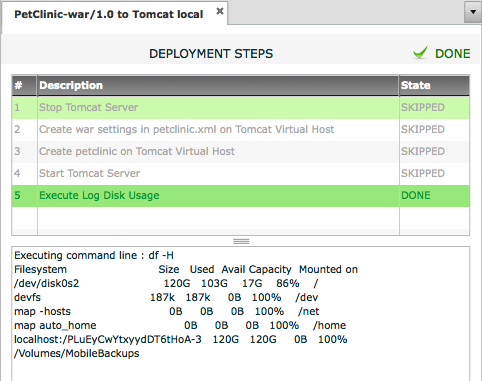 Adding the command to the manifest

We did our changes in the UI, because it's easier to see what's going on and the development cycle (edit-test-refine) is faster. But now we want to make the changes more permanent, so other versions of the same application can use it as well. We do this by editing the Manifest.MF file, that is used to create the application package DAR file.NOTE: For extensive coverage on how to create XL Deploy DARs, see the Packaging ManualThis is how the above example looks like in Manifest format:You will need to add this snippet to your Manifest, so the next time you create a DAR package, the Log Disk Usage command is included.