Update: Git Replication is now a built-in feature in TeamForge 8.1

Why do we need replication in general?

There are several scenarios in which it is quite handy to have a repository whose version history is exactly the same as the one it mirrors. Perhaps the most obvious one is the maintenance of a simple backup repository, used when the primary repository has become inaccessible due to a hardware failure, network outage, or other annoyances. Other scenarios include deploying mirror repositories to distribute heavy load across multiple servers.

We’re using Git, a DVCS. We don’t need replication. Do we?

Depending on Git workflow model your organization is using, replication makes lot of sense. In enterprise environments, centralized workflows are quite common. 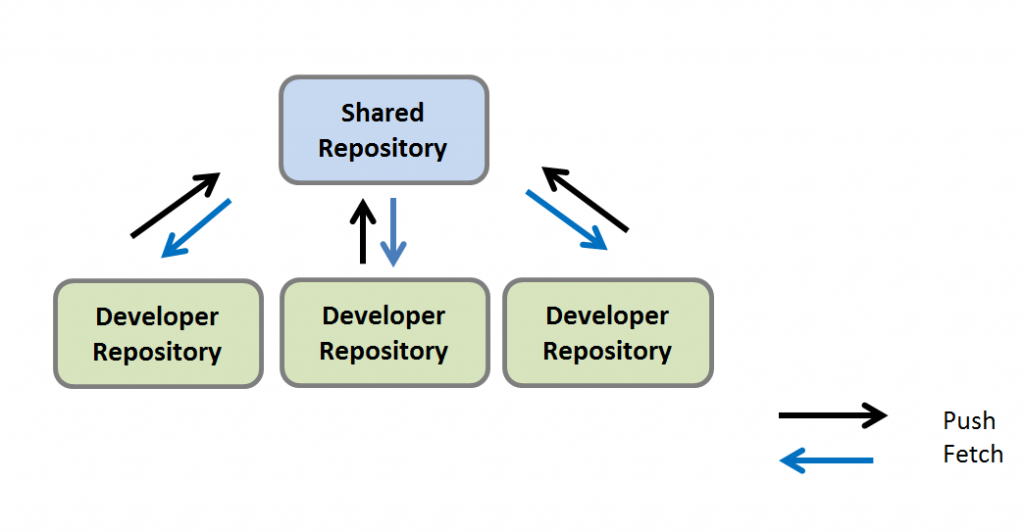 In order to understand how replication helps to address the third item from the list, load-balancing, we’ll have to take a peek at Git’s internals. In order to retrieve the latest copy from a shared repository developers have to perform a gitfetch operation. It’s a very computing and memory intensive operation (about one parallel fetch per server CPU). Moreover network bandwidth and latency matters, especially since Git fetches all missing revisions, not just the latest. Growing user bases on a given Git server and hence their fetch requests, can generate tremendous amount of load on the Git server. In order to reduce some load from the heavily loaded main Git server, its replicated counterpart can shoulder responsibility to serve all/some amount of fetch operations. Few/all developers can choose to fetch from replicated shared repository but continue performing push operations (sending update to server) on shared repository allows ultimately smoother end user experience.

How is it possible to achieve Git replication using TeamForge?

CollabNet TeamForge ships with a Git Integration which is based on Gerrit. Apart from being an efficient code review system for Git repositories, Gerrit is a full featured standalone Git Server. Gerrit has been designed to serve large number of Git repositories and is being used in communities like Google Code or the Android Open Source project [checkout here]. Gerrit provides a possibility to replicate Git repositories hosted on Gerrit to Git repositories on hosted another system (not necessarily Gerrit). All Gerrit versions supported by CollabNet (2.1.10 and 2.6.1) support Gerrit’s replication feature. In Gerrit 2.1.10, it is part of Gerrit core, in Gerrit 2.6.1, it is a separate plugin you can download from here.

If you are on more recent versions of Git Integration v8.2.x (based on Gerrit 2.8.x), download compatible version replication plugin from here.

Likewise if you’re on Git Integration v8.3.x (based on Gerrit 2.9.x), compatible plugin binary is here.

How to configure Gerrit to replicate a repository?

Open Source Gerrit project documentation describes how to configuration replication for Git repositories. However using TeamForge Git Integration makes it easier to host Gerrit server along with other benefits.  Assuming you use TeamForge with our Git Integration, let’s look at the following use case: 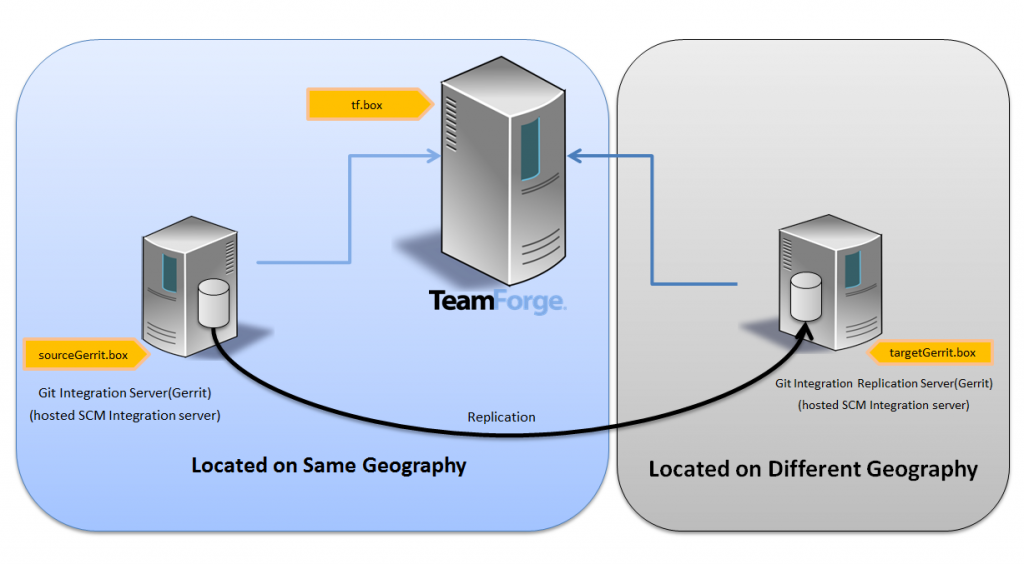 Our Objective: On sourceGerrit.box there is a repository named reprepo. We would like to set up replication for this repository to another Git Integration server targetGerrit.box integrated with the same TeamForge (tf.box)

Once you have satisfied all pre-requisites, let’s follow the steps below.

Once above is done, reprepo on targetGerrit.box will be populated with current state of reprepo from sourceGerrit.box and from thereon any creation/deletion/update of commit, branch, tags will be also replicated to targetGerrit.box seamlessly.

Do I have to repeat all these steps if I want to enable replication for another Git repository?

In order to enable replication for further Git repositories, you don’t have to repeat the whole excercise. You only have to follow steps 1 & 2  on tf.box and step 5 and 8 on sourceGerrit.box. Step 12 is optional if replication should start immediately. In case you want to replicate all repositories on sourceGerrit.box then you’ll have to add Read access for refs/* on All-Projects for group ToBeReplicatedToTargetGerritBox as per step 8.Also make sure all repositories exist in the tf.box created using Git Integration adapter hosted on targetGerrit.box.

We realize that having 12 steps to setup replication is not exactly easy. Please tell us if you encounter any problems during those steps or require further explanations. Also drop a note if you like to share any ideas how we could make the replication feature usable in an easier fashion.