Over the last 9 months the XebiaLabs dev team has been working tirelessly to develop a harder, better, faster, stronger XL Deploy for our new and existing customers. By applying an immense amount of user feedback and combining that with the framework from version 4.9, we have been able to rebuild XL Deploy to demonstrate the full power of its application deployment abilities. With the addition of our flexible artifacts storage and purging, sub-group deployments, additional interfaces for creating applications, and an array of new user interface features, making XL Deploy 5.0 the most effective/scalable/efficient/other application release tool on the market.

What is XL Deploy?

XL Deploy is the most advanced Application Release Automation tool anywhere. It automates your application deployment process so releases can occur in a repeatable, standard and efficient way. The end result? Higher quality software delivered faster – at scale. 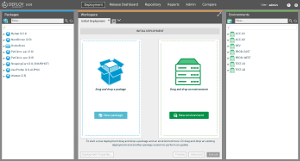 New interfaces for applications and environments

To improve usability for new users, XL Deploy now includes additional interfaces for creating applications (deployment packages) and environments. To use these interfaces, go to the Deployment Workspace and click the buttons in the Packages and Deployed Applications panes.

XL Satellite technology is an optional paid addition that enables you to distribute software across low-bandwidth connections and across platforms with increased reliability and scalability:

In addition to using XL Deploy's internal repository to store deployment artifacts (files), you can now refer artifacts that are stored in external locations such as a Maven repository.

You can now define dependencies between versions of applications. XL Deploy will check dependencies during deployment and alert you if a required version is missing from the environment.

Four new by deployment group orchestrators allow you to deploy to sub-groups and sub-sub-groups of middleware containers, sequentially or in parallel.

Whether you want to play with our new features or create your own environment, you can download XL Deploy free of charge at: https://xebialabs.com/products/xl-deploy/

With the launch of XL Deploy 5.0 and its rockstar lineup of new features we are requiring our community members to download a new license as a part of the 5.0 upgrade. A new license can be downloaded here: https://dist.xebialabs.com.