It is because there isn’t necessarily a training manual for how to be an executive sponsor or what pitfalls one must avoid.

So, how do you become a successful executive sponsor?

While the project manager is responsible for ensuring that the necessary work is being done so that a project will be successful, an executive sponsor’s role is to ensure the project is successful. While those may sound like the same thing, they are vastly different.

The project manager must focus on the day-to-day execution, while the executive sponsor should focus on the bigger picture, ensuring that the project stays aligned to the strategic goal and is being supported by other stakeholders and removing roadblocks.

Before taking on a new project, sit down and determine the required time commitment and whether you have the bandwidth to meet that commitment. Your organization may be pressuring you to step up and take another project, but it won’t do them or you any good if the project fails.

We already discussed that the success of having an executive sponsor has led to many organizations overextending their executives. An in-depth study by the Project Management Institute found that executives sponsor three projects on average at any one time and they report spending an average of 13 hours per week per project, on top of their normal work.

Obviously, this isn’t sustainable and isn’t a recipe for success. The same study found several negative impacts from executive sponsors being overextended. 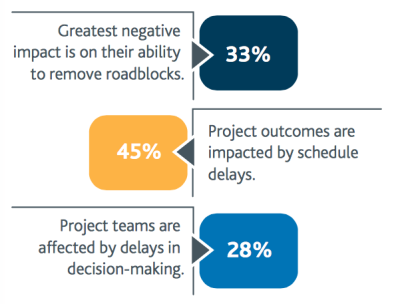 The solution here is simple; you have to learn how to say no. That is, of course, easier said than done when you’re being pressured to take on a new project, but again, it won’t do them or you any good if the project fails.

The results speak for themselves; having advanced project management knowledge makes it far more likely that you will be successful. If your organization doesn’t provide executive sponsor development, take it upon yourself to become a project management expert. It will help your team, company and self. The Boston Consulting Group has found that successful executive sponsors focus on improving their skills in change leadership, influencing stakeholders and issue resolution.

I hope this has inspired you to develop your executive sponsor skills. While it may be difficult to find the time, the payoff will be well worth it for you, your team and your company!

What are some other important keys to being a successful executive sponsor?