Can history be changed… and why should I care?

In Git version control system it is possible to change history (e.g. to remove accidentally added files which are big/confidential/infringing), or completely delete a branch without a trace (e.g. remove already merged or abandoned feature branches) . This can be useful, but may be dangerous.
What if someone does that by accident or with malicious intent? In corporate settings, surprises are usually not a good thing, especially when it comes to data loss/corruption.
Here are example commands which change history in Git:

There are ways to keep “history of history”, thus reducing or eliminating the mentioned risks. I will compare those ways for you.

What is Git reflog?

Git reflog is a mechanism built into git, which can be used to determine e.g. what commit was at the head of a branch “2 days ago”. That information is stored in a set of log files under .git/logs.

What is History Protection in Git/Gerrit Integration with CollabNet TeamForge?

In this article I will shorten “Git/Gerrit integration with CollabNet TeamForge” as TeamForge-Git, for the sake of brevity.

How do those two approaches compare?

I will describe the differences between the two approaches. In case you want a quick overview – there is a tabular comparison further down this article.
At a shallow glance they might seem similar, but when one looks deeper, one notices, that it is more like apples-to-oranges; or apple-to-blackberry ;).

Some people describe reflog as more of a personal tool for a developer to have a fallback when something goes wrong, e.g. when a local branch is deleted accidentally.
In contrast, TeamForge-Git’s History Protection was designed from the beginning as a mechanism that must work in a multi-user enterprise environment on a blessed repository and be remotely accessible and manageable through a Web UI as well as command line clients.

To configure and access Git reflog, one needs to have access to file system on the server where the “blessed Git repository” is hosted, which is unlikely in big organizations and would keep the server administrators busy.
TeamForge-Git’s History Protection has a web UI, which offers a “self –service” approach. Users with appropriate permissions in TeamForge/Gerrit can, by themselves, inspect, resurrect and permanently delete the rewritten/deleted Git refs, thus eliminating the need to involve server administrators who have filesystem access. Additionally, History Protection creates special (backup) Git refs for ordinary refs which get deleted/rewritten. Those special refs can be inspected/resurrected also using ordinary Git clients. 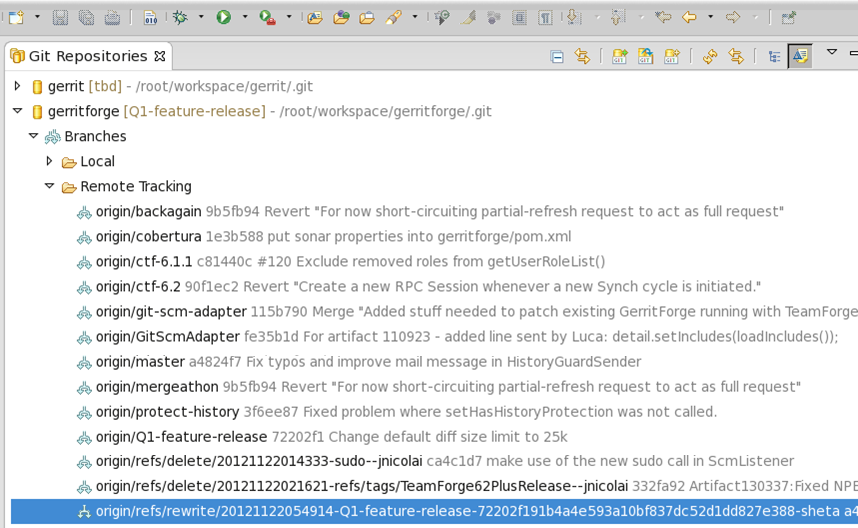 What information is stored

Git reflog records these changes in the repository:

If TeamForge-Git’s History Protection is on, then whenever a Git ref gets deleted/rewritten, a descriptive entry is added to the list of deleted/rewritten refs. This is somewhat similar to “Recycle bin” on computer desktop. Gerrit Administrators can permanently delete those entries or “resurrect” them.
Here is how it looks: 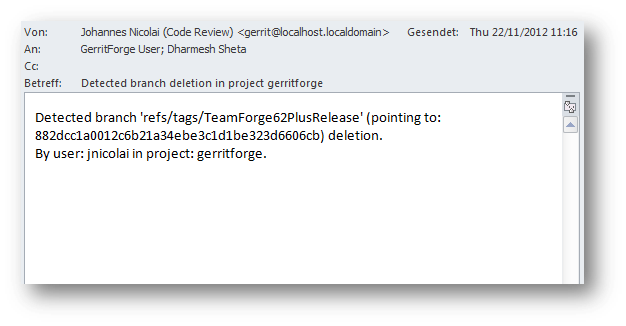 Git has a mechanism called “garbage collection”, which is used to permanently remove data that is no longer referenced. If this is triggered at an unfortunate time, then some unreferenced (e.g. due to delete/rewrite) commits will get lost.

Reflog expiration and gc pruning settings have to be manually configured by server administrator. The only possibility to not lose commits no longer referenced in a branch is to set both values to “unlimited” which will consume large amounts of disk space, slow down garbage collection and will cut off the option of  permanently deleting specific commits (all or nothing).

With TeamForge-Git History Protection, commits remain referenced from special Git refs in “recycle bin”, thus will never be pruned by Git garbage collection, unless explicitly permanently removed using Gerrit Web UI by one of the administrators.
Additionally, no need to keep a large ref  log.

It is only manually configurable by administrator having file system access. It has to be configured for each and every repository. Restoring deleted/rewritten refs requires running git commands directly on the server.

It is available out-of-the-box in TeamForge-Git. History protection is enforceable per-repository or for all repositories by setting a site-wide config option. Users with appropriate permissions can restore refs using Gerrit Web UI or Git client. Users with appropriate permissions can use ordinary git clients (e.g. ls-remote, Eclipse) to access (read-only, e.g. to inspect) rewritten/deleted refs which are visible to them under special ref directories refs/delete and refs/rewrite.
Here is how those refs look like in ls-remote:

To protect or not to protect…

Having a leaky or nonexistent protection against losing history may, in the milder case, cause some anxiousness for administrator(s), but in more severe cases it may cause real loss or corruption of data, leading to serious problems.

I have to also point out that it is possible to use both approaches at the same time.

Here is the promised table that gives a more compact comparison:

Please share your feedback – how do you like this comparison, did I miss something, what were your experiences with reflog, or other things that may have crossed your mind.