Pressure on application release cycles over the last few years has been steadily mounting. Thanks to increased demand for mobile computing applications, many organizations have significantly quickened the pace at which they develop custom applications. Looking over the horizon, however, it’s also apparent that the rate at which applications will be released and updated is about to exponentially increase as more and more organizations are moving to embrace microservices architectures.

The macro-economic driver of this shift is the rise of digital business. Organizations of all sizes are rushing to create deeper relationships with customers via business processes that now largely occur online. Not only does that shift increase the number of applications that need to be developed, it also creates a requirement to enhance the customer experience by regularly updating those applications.

From Monoliths to Microservices 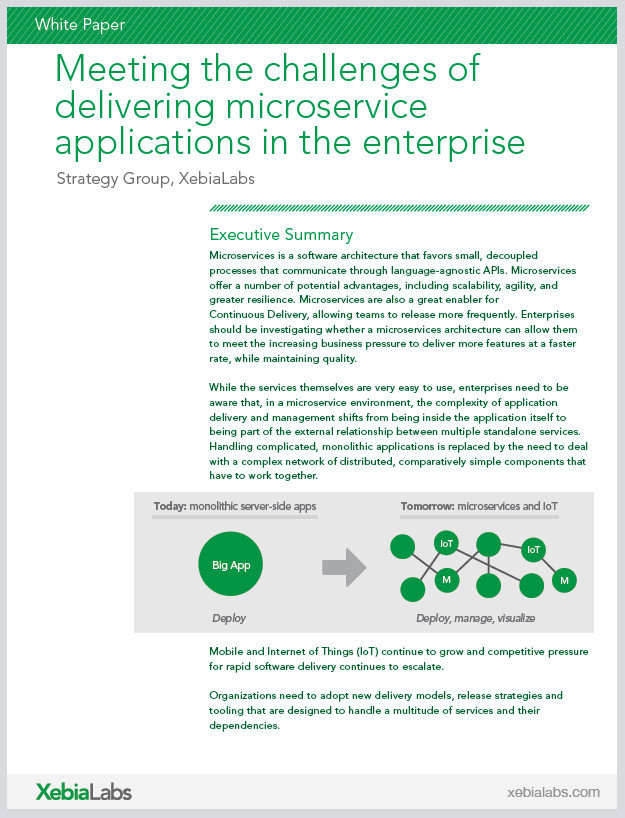 Meeting the Challenge of Delivering Microservices Applications in the Enterprise

Learn how to address three practical challenges of using microservices architecture, including: how to handle changing deployment patterns, how to deal with dependencies between services, and how to avoid getting stuck with the wrong implementation technology.

Microservices as a Driver of Application Release Management

The rise of microservices based on containers will arguably become a major driver of increased adoption of application release management platforms. In fact, by 2020 Gartner forecasts that at least 50 percent of global enterprises will have deployed at least one application release automation solution. Increased usage of application release automation should go a long way to alleviating what is already a major pain point for most IT organizations. A recent Global Modern Service Delivery Benchmark Survey published by Forrester found that only four percent of respondents tell us that the business is very satisfied with the time it takes to release new features or changes to customers. In the absence of any way to deploy applications into production environments faster it could turn out the adoption of microservices may very well exacerbate application backlogs. Developers will simply be cranking out more code at a rate IT operations teams will not have a means of being able to keep pace with. Rather than passively waiting for that inevitable rise to occur, IT organizations would be well-advised to start putting the process in place to handle what promises to be a several orders of magnitude increase in application releases.

While application release automation platforms will undoubtedly be a crucial component of a modern microservices environment, there is of course no substitute for a well-defined set of processes. The actual challenge facing IT organizations will be implementing a framework that both developers and IT operations teams can easily embrace. Instead of forcing everyone in the IT organization to immediately take on a new role, that framework needs to empower IT professionals by augmenting their respective strengths. Alas, most IT operations teams today are ill-prepared for the rise of microservices. The good news is that it’s still relatively early in terms of microservices adoption. At the same time, it’s also clear that developers being goaded by business executives to increase the rate at which applications are rolled out and updated are about the force the issue. There can be no digital business strategy without increased dependency on microservices. In fact, the difference between being swamped by versus riding that wave of microservices will almost inevitably come down to the level of automated application release management applied before that wave of microservices soon hits.