Deconstructing a Git Branch — A Guided Tour (Part 4 of 5)

Today, we continue the saga of Deconstructing a Branch in Git. Last time out, I took a survey of graphical tools, and concluded that the only one likely to help in this particular situation is gitk. As I summarized,

Unfortunately, though it’s very powerful, it’s also quite overwhelming: there’s a lot of power here, but more investment in making it available than making it accessible.

So before I dove into the actual work, I spent some time figuring out how to find my way around. Also, as mentioned last week, these examples will use a repository full of nothing in particular, and you might find int useful to download the same repo (along with its GPG signature), so you can play along.

As with many tools, you begin with gitk by establishing some context: a repository, a checkout, and a working directory. Most Git commands assume, at least by default, that they should operate on “the repo/checkout/working-directory right here.” If you’re using a general GUI tool, like say TortoiseGIT, “right here” means the directory contents shown on your screen. If you’re using the command-line tools, then you use your shell to “cd” into the appropriate spot.

Having established your “right here,” launch gitk. From the shell command line, just type “gitk” and press return. What you get is something like this: 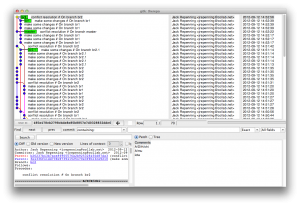 You might first want to play around a bit with the window controls, and in particular notice that both the main horizontal divider, and all the vertical ones, can be dragged to relay the window. Here’s the same window again, but with what might be a more accessible allocation of the space: 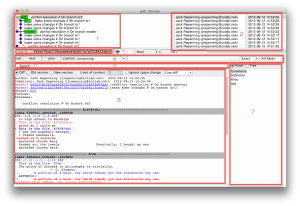 Now, what are all these sections? 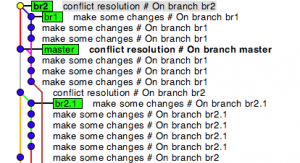 I’ll include the SHA1 hashes as annotations; if you click around in your own gitk and get lost, just paste these into the Area 3 ID field.

Recalling that this is listed newest-first, and from a branch br2 “right here,” we can immediately understand

The second change adds a slight nuance: it’s second because it’s the second-latest change contained in the history (it was merged to br2, our “right here”), and it’s labelled br1 because that’s where the change was made. But the nuance: this is not necessarily the latest change that has been made on br1: there may be later changes that have not yet made it to br2. They aren’t shown, because our “right here” is the HEAD of br2. Only changes that are contained in “right here” show up in this display.

Skipping ahead just a bit, look at the line with the “master” label. That’s a change that was made on the master branch, and it’s the latest master-branch change that’s present in our “right here” anchor point, which all makes it very familiar. But what is that little dot doing on the left-most line? I thought that was the br2 line! Is gitk confused?

Well, no. But it’s telling you either a bit more, or a bit less, of the truth than you were expecting to hear. There are two things contributing to this surprise display.

We tend to think of a “branch” as something solid and persistent, a steady presence we can rely on. The truth, however, in any versioning system, is a bit different: the contents of “the branch” at any moment may consist of work that was originally done on many branches. This is the goal and point of merging, after all. There’s a conventional fiction inherent in ideas like “the changes contained in a branch.” While at any moment in time it’s unambiguous to talk about “the branch,” digging back into its past will lead you to a complex tree of changes (actually, a “Directed Acyclic Graph,” or DAG, but let’s not quibble). It may lead you into and out of many branches. It’s completely answerable “which change was made on which branch,” but it becomes very mystical to talk about “which change is on which branch”: a given change will often be on many branches. In Git terms: at any moment in time, the HEAD of any given branch is clear, but the branch-based identity of any given change may be elusive.

Most version control systems make some effort to represent the branch in some persistent way, which is nice for the humans trying to make sense of it all. But, in any version control system, the notion of a linear, stable, solid “branch” is a synthetic fantasy. And worse than that: in order to provide this comforting fantasy, branch-perserving versioning systems have to downplay or obscure some information, such as the original authorship of a given change: during a merge, a new “version” is created for the notion of “add this to the branch,” and the change comes to be “owned”  by whoever did the merge, rather than whoever did the original work.

Git doesn’t work that way. A given change, regardless of its peregrinations through the branches, retains its original identity, authorship, date, and so on. This is very nice, from the perspective of properly attributing contributions to a large open-source project like Linux (the design target for Git). But from the standpoint of “people who think in terms of branches,” it gets a bit awkward. In this case, gitk is telling you the whole, unvarnished truth: There Ain’t No Such Things As Branches. But I could wish it would take the time to pretend there were ….

But gitk is also telling you a bit less than it could. In the Area 1 display, you can see two kinds of changes: plain old changes (with commentary like “make some changes”), and merges that resulted in conflicts that had to be fixed (“conflict resolution”). But if you’d been watching over my shoulder as I did all this, you’d notice that there were often changes of a third type: conflict-free merges (which Git calls “fast-forward” merges). A fast-forward merge occurs when the two branches to be merged are identical except for some number of additions on only one branch. For example,

Since no changes were made to master, this is really easy to do: just apply those step-2 changes to master in the same way as they were applied to branch-one. This is a fast-forward merge.

Gitk is not showing the fast-forward merges, but they’re hiding there, wherever the branch picture gets confusing.

All this logic-chopping and nuanced reading of surprising displays will become crucial to the process we came here to do: deconstructing a polluted branch and reconstructing the branch as it ought to be.

Do you have any experience with gitk, or other GUI tools for managing complex Git branch structures? Can you fill in any of the holes in my understanding? Let us all know, in the comments!

Part 5: Deconstructing a Git Branch — Rolling Up Our Sleeves, Battling the Beast