From Dev on your Laptop to Prod in the Cloud: How XL Deploy and Amazon AWS OpsWorks take away the pain 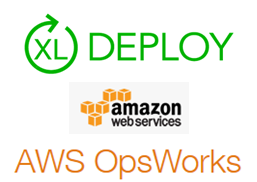 As a developer, I want the pain the effort required to go from a code change to a running version of my app (which I can test) to be as minimal as possible. Luckily, there are a whole bunch of frameworks and tools that will give me an on-demand environment: Vagrant, Terraform, all the virtualization and cloud management platforms and now, of course, containers and all the related orchestration frameworks too. But I really also don't want to have to re-tool my environment provisioning scripts or container definitions every time I add or change some aspect of my app. And there are other use cases to consider: if I'm working in a plane, I'll (for a little while longer, at least ;-)) want an offline version using Vagrant, Docker or so; when I want to test a bigger setup in e.g. EC2 that is a bit more like my production environment, I'll use something like AWS OpsWorks. Using XL Deploy in combination with OpsWorks can make both of these problems go away. Even better, I can delegate the problem of defining, testing, updating etc. my environments to an Ops or platform team. I then only have the "app layer" - the part I'm actually working on - to worry about:

Result: I can get my app running without hassles whenever I need to - locally, in the cloud, in whichever size environment I need. I don't have to worry about any of the usual environment- or OS-maintenance stuff, and I also don't have to write and maintain deployment scripts, manifests, cookbooks, playbooks, Dockerfiles or anything like that for my app.

1. An OpsWorks stack defined as an Environment Template in XL Deploy: 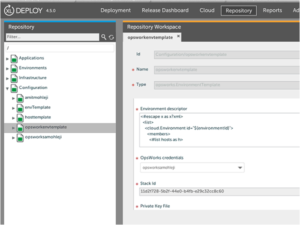 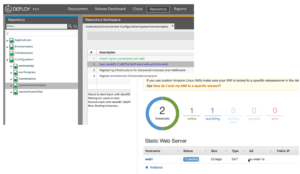 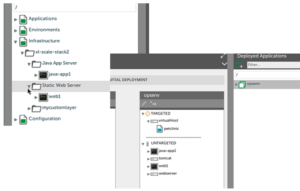 If you'd like to give this a try, you can download XL Deploy, get the XL Deploy OpsWorks plugin and sign up for OpsWorks right away!